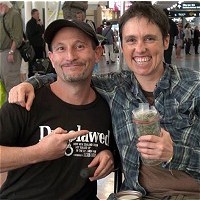 There’s not too many people who would have their photo taken at an airport in New Zealand holding marijuana unless they are customs officers – and Rebecca Reider is certainly not one.

We first mentioned Ms. Reider back in March, when she faced court charged with various offences connected to the importation of medical cannabis products. She received a discharge without conviction.

Then in June, Ms. Reider was among a group who strongly criticised the nation’s Ministry of Health over a government cannabis review.

Rebecca Reider is back in the news again, after bringing a bag of cannabis through customs at Auckland Airport, fully declared and without incident.

“We’ve made history,” she is reported as saying. “I’m the first person to possess marijuana in its natural form since the Misuse of Drugs Act was passed. It’s huge.” Well, certainly not the first person, but we guess you get what she means.

“This historic jam jar contains the first legal raw cannabis flower in New Zealand since medicinal cannabis was outlawed in the 1960s”.

Due to a loophole in New Zealand law,  a one-month supply of medicinal cannabis or cannabis-related product can be brought into the country, assuming the person doing so has been legally prescribed by a medical practitioner overseas. It’s this loophole that was used for victory in the original court action Ms. Reider faced. A very interesting aspect of this loophole is that it’s been that way for 40 years.

However, it can be a very long way to go just to get one month’s supply of cannabis medicine – and very expensive prescription too.

“It’s fantastic customs are now recognising the law and allowing people to bring medicine into the country but I remain really concerned for people who are too poor or too sick to go overseas for it,” said Ms. Reider’s lawyer, Sue Grey.

Rebecca (who also goes by the name Redwood) is keen to help others bring legal medical cannabis into the country and will soon put together a step-by-step guide.

Previous article
University Of Louisville Cultivating Hemp
Next article
Cannabinoids Boost Tadpole Night Vision
Terry Lassitenaz
Terry Lassitenaz writes exclusively for Hemp Gazette and has done so since the site launched in 2015. He has a special interest in the political arena relating to medical cannabis, particularly in Australia, and addressing the many myths surrounding this incredibly useful plant. You can contact Terry here.
RELATED ARTICLES
News