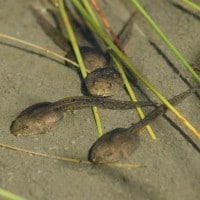 It’s certainly interesting that cannabinoids have been found to improve low-light vision of tadpoles by sensitizing retinal cells, but why is it important?

Researchers from  McGill University’s Montreal Neurological Institute were testing to see test how tadpoles reacted to visual stimuli after exposure to increased levels of cannabinoids; both exogenous (introduced from external sources) or and endogenous (created from within an organism).

Cannabinoids are chemical compounds that act on cannabinoid receptors in cells, repressing neurotransmitter release in the brain. Cannabis contains more than a hundred cannabinoid compounds; the best known being tetrahydrocannabinol THC and cannabidiol (CBD).

What the researchers expected to find was a decrease in activity in the tadpole’s retinal ganglion cells (RGCs) under low-light conditions, but they witnessed an increase – consistently.

“The first tendency is to want to ignore it. But it was such a strong effect, we knew there was something important here,” said lead researcher, Professor of neurology and neurosurgery, Ed Ruthazer.

The importance for humans is that it may have a similar effect and the discovery of a previously unknown role for cannabinoids in brain signaling.

High levels of type 1 cannabinoid receptors (CB1R) have been found in all vertebrates tested, and are present within nearly all retinal cell types throughout development and adulthood

“Though technically more challenging, a similar study should now be performed in the mouse retina or even in cultures of human retinal cells,” said Professor Ruthazer.

The team’s work and results are detailed in a paper published in the journal eLife Sciences.

There is already some indication of cannabis improving night vision in humans. A 2004 paper details reports of Jamaican fishermen experiencing benefits after ingesting a crude herbal cannabis tincture. Moroccan fishermen and mountain dwellers observe improvements after smoking kif (or kief), which is finely-chopped marijuana and indigenous tobacco.

Other benefits related to sight may be gained through cannabis-based medicine. Cannabinoids could be useful in slowing down Retinitis pigmentosa and cannabis is already used widely in managing glaucoma, the leading cause of irreversible blindness worldwide. Cannabis has been shown to relieve pressure within the eye (intraocular pressure or “IOP”), however its use in treating this disease is still hotly debated.