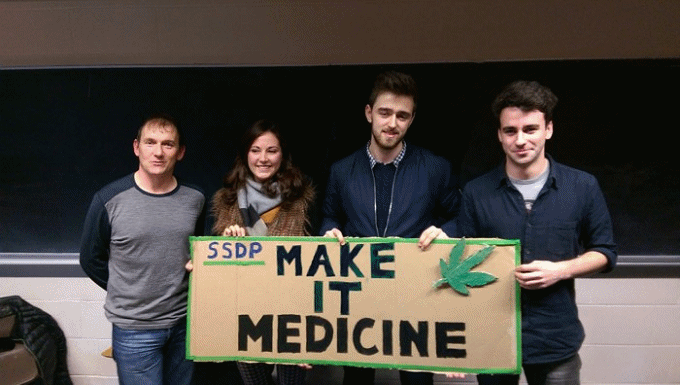 Medical cannabis products may soon be made more widely available in Ireland, thanks primarily to the efforts of People Before Profit TD Gino Kenny.

RTÉ reports the Dáil (lower house of the Oireachtas – Irish legislature) has enabled a bill to make medicinal cannabis available in the country to pass the first phase of becoming law. This came about after the Government stated it would not oppose the legislation.

Champion of the Bill, Gino Kelly, took up the cause around 9 months ago after learning about the potential benefits of cannabis medicines.

“The growing realisation that existing policies and legislation are failing and compassionate access is succeeding means that a review of our attitude to cannabis as a medicine is long overdue,” said Mr. Kelly.

Highlights of the Cannabis for Medicinal Use Bill 2016:

“The essence of this bill is to relieve people’s unnecessary suffering in a variety of medical conditions and to promote recovery though proven safe access to an effective medicine,” said Mr. Kenny during his introduction of the Bill.

Mr. Kenny also referred to the UK’s All-Party Parliamentary Group for Drug Policy Reform report in September during his speech. That report stated the continued listing of cannabis under Schedule 1 (no therapeutic value and therefore banned) was “irrational”.

This Bill won’t mark the first time medicinal marijuana products have been made available in Ireland. In July 2014, the Misuse of Drugs Regulations 1988 were amended to allow for some products to be used; but as in similar cases in other countries, red tape and cost discouraged their use.

A recent survey indicated 92% of Irish people supported cannabis being legalised when recommended for medical reasons by a doctor.

Previous articleCannabis Based Breast Cancer Treatment Breakthrough?
Next articleNSW Medicinal Cannabis Trial Now Recruiting Patients
Terry Lassitenaz
Terry Lassitenaz writes exclusively for Hemp Gazette and has done so since the site launched in 2015. He has a special interest in the political arena relating to medical cannabis, particularly in Australia, and addressing the many myths surrounding this incredibly useful plant. You can contact Terry here.
RELATED ARTICLES
News