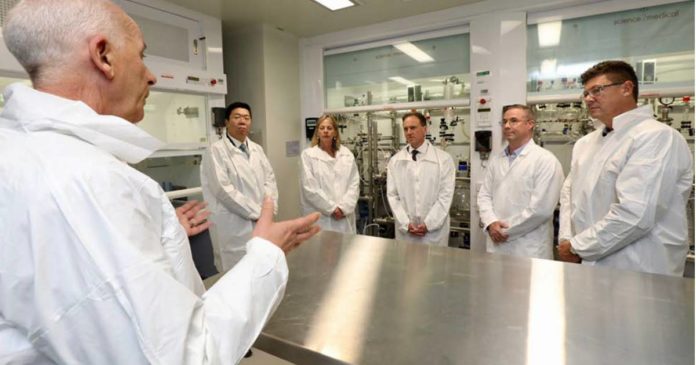 The THC Global (ASX:THC) project in Southport is the largest bio-pharma manufacturing facility in the Southern Hemisphere according to the company, and has an expected capacity of 12,000 kg of Active Pharmaceutical Ingredient (API) extracts per year. Pending securing of required approvals, THC Global expects to further process these extracts into finished medicines including oils and capsules.

In July this year subsidiary THC Pharma Pty Ltd was awarded a Manufacture Licence from the Australian Office of Drug Control in relation to the Southport facility.

Commercial production is expected to commence early next year.

Minister Hunt, who also toured the facility, said its opening demonstrated the Morrison Government’s commitment to not only boosting the local industry, but also helping Australians living with chronic or terminal illnesses. However, some would argue that much more needs to be done in terms of the regulatory red tape Australian patients and doctors face in accessing medicinal cannabis.

Aside from producing medicines for the Australian and overseas market, the facility will also play a role in local research.

Australia’s Morrison Government notes more than 8,500 patients have been authorised to access a medicinal cannabis product nationally, with approximately one-third of these approvals granted for patients in Queensland. The state is home to around 20% of Australia’s population.

Previous articleGreater Focus On Industrial Hemp In Victoria
Next articleThailand Loosening Up Hemp Regulations
Steven Gothrinet
Steven Gothrinet has been part of the Hemp Gazette in-house reporting team since 2015. Steven's broad interest in cannabis was initially fueled by the realisation of industrial hemp's versatility across multiple sectors. You can contact Steve here.
RELATED ARTICLES
News