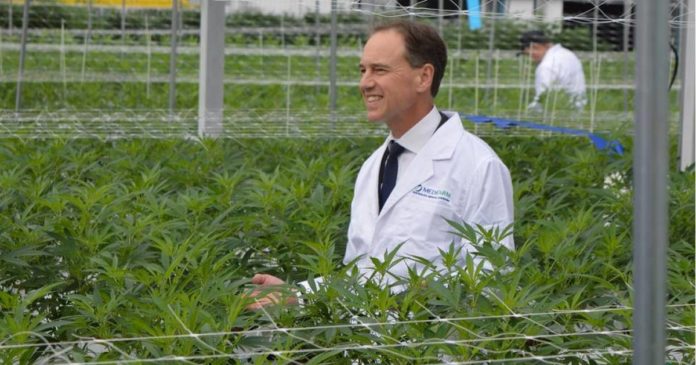 The Minister and Federal Member for Fairfax Ted O’Brien toured the Medifarm facility, which is situated at an undisclosed location on the Sunshine Coast.

“The cannabis products produced from the plants at Medifarm will be used to help Australians with conditions like epilepsy, chronic pain, cancer pain and multiple sclerosis,” said Mr. O’Brien.

“We’re in the business of helping Aussie patients,” said Medifarm founding director Adam Benjamin. “We’re at a privileged moment in time where we now must reintroduce medical cannabis to mainstream medicine, just like it used to be prior to 1937.”

Mr. Benjamin said Australia is at the crossroads of good agriculture meets good healthcare, which meets great policy (although some would argue the latter). Mr. Benjamin praised Mr. O’Brien’s “unflappable support” and dedicated the day to eight-year-old Sam Martin, a boy who died from cancer in 2014 and whose final stages of life were eased somewhat by the use of medical cannabis – which was illegal at the time.

Medifarm is currently supplying around 1.2 tonnes of cannabis material a year, with plans to expand that to 7 tonnes annually via the current site.

While legal now, Mr. Hunt acknowledged medical cannabis in Australia is highly regulated – and makes no apologies for that.

“We want a robust Australian medical cannabis industry so doctors have safe, quality locally grown and manufactured products they can confidently prescribe to their patients.”

Just over 12,000 scripts have been issued nationally said the Minister; but it should be noted one patient may have a number of scripts. 81 licences related to medical cannabis cultivation, manufacture and distribution have been issued by the Federal Government since legislation was passed in 2016, with Medifarm accounting for three of those.

Medifarm is a privately held company and was the first Australian medical cannabis company to be awarded Government licences to cultivate and manufacture. It has a partnership with Tikun Olam, an Israeli firm, which gives Medifarm access to genetic strains  developed for the treatment of medical conditions.

Previous articleDEA Announcement Regarding Hemp And Marijuana
Next articleCrop Insurance Finally On The Way For U.S. Hemp Farmers
Gillian Jalimnson
Gillian Jalimnson is one of Hemp Gazette's staff writers and has been with us since we kicked off in 2015. Gillian sees massive potential for cannabis in areas of health, energy, building and personal care products and is intrigued by the potential for cannabidiol (CBD) as an alternative to conventional treatments. You can contact Gillian here.
RELATED ARTICLES
News