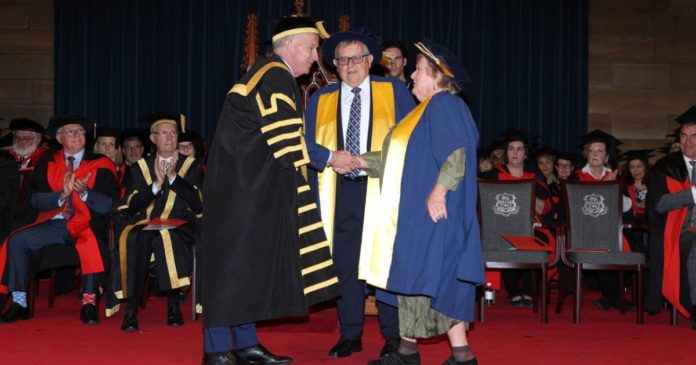 Australian philanthropists Barry and Joy Lambert have been bestowed with Honorary Fellowships from the University of Sydney for their support of medicinal cannabis research.

It’s a topic that’s very close to their hearts. Their granddaughter Katelyn has Dravet Syndrome, a form of epilepsy previously known as severe myoclonic epilepsy of infancy (SMEI). Her condition was alleviated through the use of a cannabis oil based on cannabidiol. Now eight years old, Katelyn’s condition has improved to the degree she is able to attend school and participate in other activities enjoyed by children of her age.

As medical cannabis advocates, the Lamberts have certainly put their money where their mouths are.

Back in 2015, they donated AUD $33.7 million to the University of Sydney for the establishing of the Lambert Initiative for Cannabinoid Therapeutics, which is researching the use of cannabinoids in treating a range of diseases and conditions.

Among its current activities is supporting a research study involving the testing of a cannabis medication on sufferers of chronic insomnia. The Lambert Initiative also provides expert advice and educational resources to medical professionals, pharmacists, the Australian government and the broader community.

“The Lamberts’ support has enabled the creation of state-of-the-art facilities that are now thriving with the research activity of around 40 researchers,” says part of the Fellowship citation. “Barry and Joy are fierce proponents of the need to change the way we think about cannabis and have campaigned strongly for greater patient access to cannabis-based medications.”

In addition to supporting research at the University and other advocacy work, Barry Lambert has also gone on to chair Ecofibre (ASX:EOF); a manufacturer of hemp products in the USA and Australia. Among Ecofibre’s businesses is Ananda Hemp in the USA, which makes nutraceutical products including cannabidiol-based preparations. Ecofibre listed on the ASX in March this year.

Mr. Lambert has an extensive business background that is serving him well at Ecofibre. His accomplishments include the founding of financial services giant Count Limited in 1980, which was acquired by Commonwealth Bank in 2011. He remained on its Board until 2017 when he took up the Chair position at Ecofibre.

Previous articleAnother Study Confirms Bees Love Hemp
Next articleBod Australia And Uni SA Collaborate On MediCabilis Research
Terry Lassitenaz
Terry Lassitenaz writes exclusively for Hemp Gazette and has done so since the site launched in 2015. He has a special interest in the political arena relating to medical cannabis, particularly in Australia, and addressing the many myths surrounding this incredibly useful plant. You can contact Terry here.
RELATED ARTICLES
News