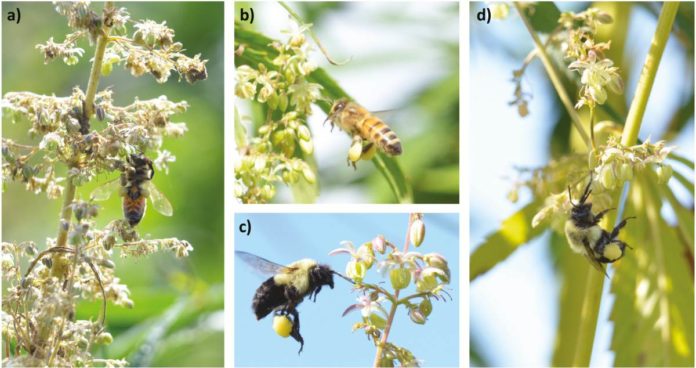 A recently released study has found bees really like hemp – and it seems the taller the variety, the better.

Researchers from Cornell University’s Department of Entomology  made repeated sweep net collections of bees visiting hemp flowers on eleven farms in the Finger Lakes region of New York state and found 16 different bee species. The most commonly captured were A. mellifera (European honey bee – 60% – image A above ) and B. impatiens (common eastern bumblebee – 30% – image B above).

An interesting finding was plant height strongly correlated with bee species diversity and also abundance, with taller varieties attracting a broader diversity. Tall hemp plants attracted nearly 17 times the number of visits compared to short plants. The researchers suggest this is not only due to taller plants producing a greater overall amount of pollen, but also that they are more apparent.

The study report states hemp has the potential to provide a critical nutritional resource for bees in periods of floral scarcity and  may assist in sustaining pollination services for other crops. It was noted abundance increased throughout the sampling period, perhaps indicating hemp’s importance in late summer when the flowers of other late-season crops deteriorate.

The researchers also made an important point with regard to pest management. While hemp is a hardy crop, it still has its share of predators and eradication of hemp pests can also pose a threat to bees as many pesticides aren’t bee-friendly.

“As cultivation of hemp increases, growers, land managers, and policy makers should consider its value in supporting bee communities and take its attractiveness to bees into account when developing pest management strategies,” state the authors.

Another interesting bit of information from the study is the effect of cannabinoids on bees.

“The presence of cannabinoids, particularly tetrahydrocannabinol (THC), in hemp pollen (York et al. 1975) is not likely to have an impact on bee development due to the loss of cannabinoid receptors in insects,” state the authors.

The study report, titled “The Bee Community of Cannabis sativa and Corresponding Effects of Landscape Composition”  is an interesting read and was published in the journal Environmental Entomology.

Previous articleTexas Hemp Plan Submitted To USDA
Next articleLamberts Land Honorary Fellowships For Cannabis Contribution
Gillian Jalimnson
Gillian Jalimnson is one of Hemp Gazette's staff writers and has been with us since we kicked off in 2015. Gillian sees massive potential for cannabis in areas of health, energy, building and personal care products and is intrigued by the potential for cannabidiol (CBD) as an alternative to conventional treatments. You can contact Gillian here.
RELATED ARTICLES
News