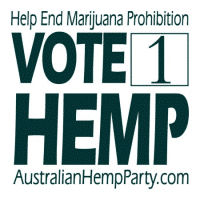 Recent Federal elections in Australia saw some interesting actions by hemp activists – or perhaps mischievous parties trying to put blame on them.

A section of lawn at Parliament House in the nation’s capital, Canberra, has been poisoned in a very specific way.

The poison was applied in a fashion that as the grass died, it spelled out a message – “Vote One Hemp”.

The finger was pointed at members  of Australia’s Hemp Party, who have vehemently denied the allegation.

“We’re a bunch of hippies, we’d never use pesticides and herbicides to deliver a message like that, we’ve got great artists who do great banners for us,” said party secretary Andrew Kavasilas.

Mr. Kavasilas said it could have been the action of wayward supporter or a rival party seeking to make the Hemp Party look bad.

The culprit’s timing appeared to be a little off as well if the goal was to motivate voters as the story didn’t hit the headlines until after voting was well and truly over. Assuming the browning of the lawn did start occurring by election day, the herbicide would have been laid down 7-14 days prior if glyphosate was used.

The Hemp Party fielded 8 candidates in the Federal Election, but wasn’t successful in securing any seats in the Senate.

The Hemp Party’s main platform is the re-legalising and regulation of marijuana in Australia for personal, medical and industrial use.

In a related story, Pauline Hanson’s One Nation party has been accused of lifting parts of the medical marijuana policy (and others) it took to the election from Wikipedia. The party hasn’t commented on the accusations as yet.

One Nation says it “upholds the right of Australians to access medical cannabis, that may give them quality of life and life itself.”

While apparently strongly supporting medical cannabis, One Nation has proven to be a polarising party for some of its views on other issues such as immigration, Islam, climate change and refugees.

One Nation appears to have picked up nearly ten percent of Senate votes in Queensland and claims it could also win Senate seats in several other states. While it may wind up wielding some power in the Senate, some of its more extreme views may prove to overshadow or be detrimental to its efforts in accelerating medical cannabis access.

Previous articleJapan’s First Lady Buys Hemp-Based Medicine
Next articleEpilepsy Expert Joins Australian Medical Cannabis Company
Terry Lassitenaz
Terry Lassitenaz writes exclusively for Hemp Gazette and has done so since the site launched in 2015. He has a special interest in the political arena relating to medical cannabis, particularly in Australia, and addressing the many myths surrounding this incredibly useful plant. You can contact Terry here.
RELATED ARTICLES
News