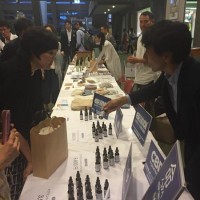 It seems  Japan’s First Lady, Akie Abe, is a big fan of hemp and wants to see the industry have a greater presence in her country.

The Prime Minister apparently suffers from ulcerative colitis. The condition led to him resigning from his position in 2007; but he returned as Prime Minister in 2012.

Around 75,000 Australians have been diagnosed with Crohn’s disease or ulcerative colitis. Cannabidiol, extracted either from medical cannabis or industrial hemp has shown promise in treating both.

“That the First Lady chose Elixinol to treat her husband’s ulcerative colitis and usher in increased hemp acceptance in Japan is a significant honor,” said Paul Benhaim; co-founder of Elixinol – the medicine purchased. “We look forward to working closely with the people of Japan.”

The First Lady also chatted with Hemp Foods Australia CEO Paul Benhaim; who said he was very pleased with the meeting.

“More importantly, it is a major breakthrough to have an individual of high influence backing our cause in Japan, and Hemp Foods Australia hopes the First Lady will engage leaders of Japanese industry in these critical conversations as we look to make a more sustainable planet through the use of hemp.”

In December last year, Akie Abe extolled the virtues of hemp in a magazine interview; saying all parts of the plant had uses.

“While it is not yet permitted in Japan, I think it can be put into great practical use for medical purposes as well,” she is quoted as saying.

“I’ve even considered myself to apply for a permit to grow hemp.”

Japan’s cannabis laws are some of the most restrictive in the world, even though historically hemp played an important role in its culture for thousands of years.

Cannabis was cultivated all over Japan until the middle of last century. After World War II and during the period Japan was under occupation by the USA, with it came laws on prohibition. However, some cultivation still occurred. Today, there are only a few dozen licensed hemp farms in the country – a situation that may change soon if Akie Abe has her way.

Previous articleMedical Cannabis Saving USA’s Medicare System
Next articleHemp Hijinks In Australia’s Elections
Gillian Jalimnson
Gillian Jalimnson is one of Hemp Gazette's staff writers and has been with us since we kicked off in 2015. Gillian sees massive potential for cannabis in areas of health, energy, building and personal care products and is intrigued by the potential for cannabidiol (CBD) as an alternative to conventional treatments. You can contact Gillian here.
RELATED ARTICLES
News