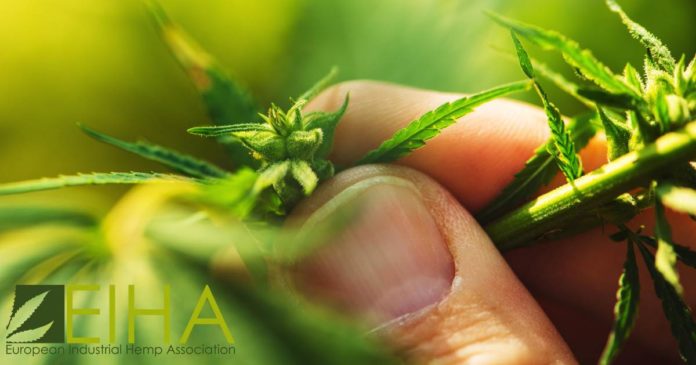 It says the EC recently arrived at a preliminary conclusion that extracts from industrial hemp, which would include cannabidiol, qualify as drugs in EU legislation. This has thrown a spanner into the works for current Novel Food applicants, with the freezing of all applications relating to hemp extracts and natural cannabinoids under Novel Food Regulation. However, synthetic cannabinoids are not included.

“If confirmed, this position is likely to strike the final blow to the sector and deprive farmers from a low maintenance and profitable rotation crop with the potential to bringing environmental benefits,” says the EIHA. “Cannabidiol would stay on the market but only in its synthetic form, produced via polluting chemical manufacturing.”

The IEHA’s stance is products derived from industrial hemp are not narcotic or psychotropic drugs. Industrial hemp, by definition, is very low in THC and hemp high in THC is considered marijuana; a very different plant.

EIHA President Mr Daniel Kruse hypothesises the EC’s move is deliberate decision to kill the sector instead of pursuing science-based and transparent policy, and fears if confirmed it will fuel the grey market of products not manufactured to food safety standards nor marketed in line with labelling regulation.

Extracts such as cannabidiol are the most lucrative aspect of hemp, but a narcotics classification will have flow on effects for the supply other materials that can be sourced from the same crop, particularly hemp fibre.

This isn’t done and dusted yet – it’s understood the applicants caught up in the situation have been invited to provide comment; and no doubt the EIHA is continuing to lobby hard on behalf of the sector.

Previous articleMore Hope From Australian Cannabis Cancer Treatment Research
Next articleLittle Green Pharma Gains WA Government Grant
Terry Lassitenaz
Terry Lassitenaz writes exclusively for Hemp Gazette and has done so since the site launched in 2015. He has a special interest in the political arena relating to medical cannabis, particularly in Australia, and addressing the many myths surrounding this incredibly useful plant. You can contact Terry here.
RELATED ARTICLES
News