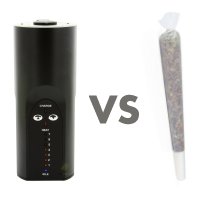 A recent peer-reviewed study has concluded that electronic vaporizing equipment appears to offer a safer and more effective delivery method for medical marijuana use.

While burning marijuana may not involve quite the cocktail of chemicals found in tobacco smoke; burning plant material often creates carcinogens, tars and other toxins.

Vaporizing on the other hand, also referred to as “vaping”, does not involve combustion and no smoke is created. The plant material is heated to the point that the cannabinoids such as THC and cannabidiol are released, which are then inhaled.

Common sense would dictate that vaping would likely be a safer alternative to smoking medical marijuana, but it is yet to be scientifically proven. This new study, carried out by researchers Christian Lanz, Johan Mattsson, Umut Soydaner and Rudolf Brenneisen from the University of Bern in Switzerland,  is a step towards confirming that conclusion.

Additionally, indications of combustion of cannabis, such as the production of ash or smoke, was not noticed with any of the electronic devices tested.

Cannabis vaporisers are still reasonably new and the technology is rapidly evolving, thanks in part to the massive popularity of related electronic cigarette technology. These days, vaporisers have advanced features such as temperature sensors and controls. Vaping has come a long way in a short time and will continue to be refined; resulting in more efficient devices.

But even the vaping devices of today appear to be the best delivery system for medical cannabis.

“As the oral administration of cannabinoids reveals poor and unreliable bioavailability and smoking of cannabis cannot be recommended for medical purposes, alternative efficient and less harmful application modes are needed,” states the study’s conclusions

“Vaporization of cannabis without the formation of potentially toxic pyrolysis products appears to be such an alternative.”

The researchers stress clinical tests are now required to confirm the efficiency of vaporizers as therapeutic application tools.

Medicinal Cannabis: In Vitro Validation of Vaporizers for the Smoke-Free Inhalation of Cannabis can be viewed in full here.

Previous articleHillary Clinton Reiterates Support For Medical Cannabis Research
Next articleMedical Marijuana Qualifies For Florida Ballot
Gillian Jalimnson
Gillian Jalimnson is one of Hemp Gazette's staff writers and has been with us since we kicked off in 2015. Gillian sees massive potential for cannabis in areas of health, energy, building and personal care products and is intrigued by the potential for cannabidiol (CBD) as an alternative to conventional treatments. You can contact Gillian here.
RELATED ARTICLES
News