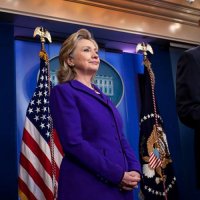 While a search of U.S. Presidential candidate Hillary Clinton’s web site turns up zilch on the terms “medical cannabis” or “industrial hemp”, she appears to have an open mind on the issues. However, she is very cautious when making public statements.

In an interview on WBZ NewsRadio earlier today, Ms. Clinton said states yet to legalize marijuana need to take special note of those that have.

“And I do think on the federal level we need to move marijuana from the Schedule One of drugs, move it to Schedule Two, which will permit it to be the basis for medical research,” Ms. Clinton said.

“A lot of experts in the field are telling me we’ve got to learn a lot more. For example, you’re taking marijuana for medical purposes, how does it interact with all the other drugs you’re taking? What should be the right dosage?”

“At the risk of committing radical candor, I have to say I think we need to be very clear about the benefits of marijuana use for medicinal purposes. I don’t think we’ve done enough research yet, although I think for people who are in extreme medical conditions and who have anecdotal evidence that it works, there should be availability under appropriate circumstances.”

On the topic of industrial hemp, Ms. Clinton also seems to have an open mind; but little understanding. In December last year, she was asked by a voter about her views on industrial hemp and after misunderstanding the question, said:

“I think we have to explore it. It’s a crop, right? We have to move marijuana down to Schedule II.”

It’s one of the great frustrations of hemp supporters that the plant is Schedule I given industrial hemp is a very different plant to marijuana and contains just a fraction of the psychoactive substance tetrahydracannabinol (THC).

Industrial hemp’s THC levels are so low that its value as a recreational drug is zero. Its current classification is a little like classifying poppy seeds found in and on many food products the same based on the fact they come from the plant that heroin and morphine is derived from.

Even at Schedule II, it’s an incorrect classification for hemp; similar to regulating tomatoes or eggplant in the same way as tobacco due to their low level of nicotine content.

Previous articleVirginia To Shrug Off Federal Industrial Hemp Laws
Next articleMedical Cannabis – Vaping Vs. Smoking
Terry Lassitenaz
Terry Lassitenaz writes exclusively for Hemp Gazette and has done so since the site launched in 2015. He has a special interest in the political arena relating to medical cannabis, particularly in Australia, and addressing the many myths surrounding this incredibly useful plant. You can contact Terry here.
RELATED ARTICLES
News