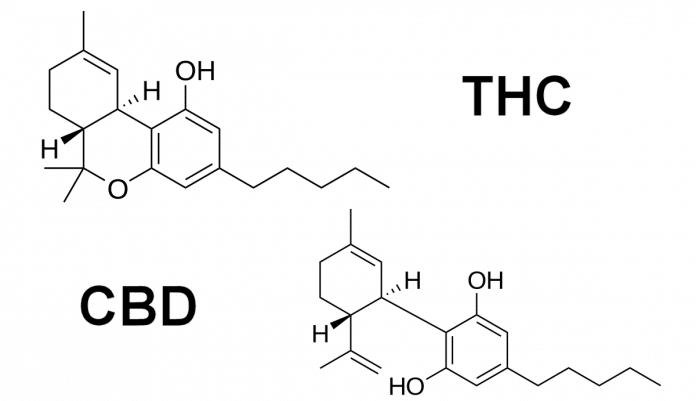 In a fight between THC and CBD, which would win? A group of researchers say THC’s therapeutic benefits are understated.

When it comes to medical cannabis, CBD (cannabidiol) grabs a lot of attention. Its been claimed this non-intoxicating cannabinoid is beneficial in treating or managing a wide range of conditions. Some claims are backed by pretty solid and scientific evidence, some is anecdotal and some perhaps wishful thinking or just  snake-oil sales pitches.

As for THC (tetrahydrocannabinol), the psychoactive cannabinoid that is responsible for the high pursued by recreational users, it is tending to take a bit of a back seat to CBD these days. However, researchers at the University of New Mexico (UNM) have suggested THC may be more important than CBD in terms of producing therapeutic benefits.

The study was based on real-time measurements of the effects of cannabis, collected from user input associated with the ReleafApp moble application, which has been publicly available since 2016. Data from nearly 20,000 user sessions occurring between June 2016 and May 2018 was examined. It should be noted the application was developed by co-authors of the UNM study,  Franco Brockelman, Keenan Keeling and Branden Hall.

“In our study, CBD appears to have little effect at all, while THC generates measurable improvements in symptom relief,” said Jacob Miguel Vigil, associate professor in UNM’s Department of Psychology and lead author. “These findings justify the immediate de-scheduling of all types of cannabis, in addition to hemp, so that cannabis with THC can be more widely accessible for pharmaceutical use by the general public.”

However, it was also noted THC was more prevalent in relation to negative side effects.

Dried, whole natural flower was associated with more significant symptom relief than the use of other types of products including concentrates, edibles, tinctures and topical preparations.

The study report titled, “The Association between Cannabis Product Characteristics and Symptom Relief,” has been published in the journal Scientific Reports.

Previous articleAusCann Appoints New CEO
Next articleWestern Australia’s WOA Secures Industrial Hemp Licence
Gillian Jalimnson
Gillian Jalimnson is one of Hemp Gazette's staff writers and has been with us since we kicked off in 2015. Gillian sees massive potential for cannabis in areas of health, energy, building and personal care products and is intrigued by the potential for cannabidiol (CBD) as an alternative to conventional treatments. You can contact Gillian here.
RELATED ARTICLES
News