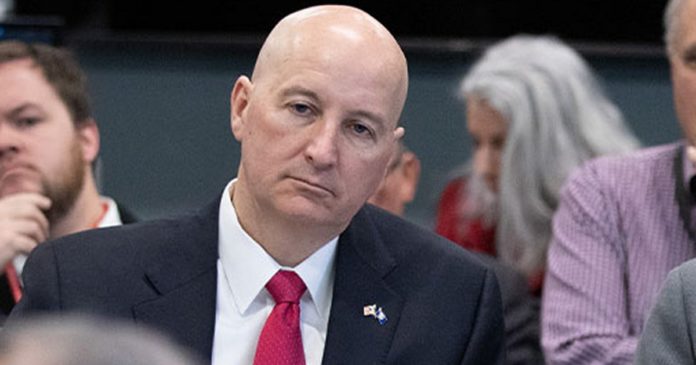 In a press conference after discussion between lawmakers regarding Legislative Bill 474, Governor Ricketts said:

“So this is a dangerous drug that will impact our kids. If you legalise marijuana, you’re going to kill your kids. That’s what the data shows from around the country.”

It was really an over the top statement given Legislative Bill 474 is in connection to medicinal cannabis – but the Governor sees it as the thin edge of the wedge and also wants the FDA’s blessing on any medical cannabis products.

Here’s the full video, posted by The Recount:

The Governor didn’t appear to clarify how marijuana was going to kill kids – but one thing is fairly certain, it’s unlikely to be from overdose. There have been zero deaths caused by marijuana overdose in the USA – ever.

Various commentary on the Governor’s spray have likened it to a very old propaganda film called “Reefer Madness” that also made outlandish claims. In fact, it seems the Governor’s comments has driven a spike in views of the video.

Other examples of Governor Ricketts’ use of fear-mongering in opposition to anything marijuana related can be found on the Governor’s web site.

Nebraska doesn’t currently have a medicinal marijuana program. While an amendment relating to patient access was to appear on last November’s ballot, the Nebraska Supreme Court ruled it must be removed; overriding the will of the people. The group behind the amendment is now working on getting another amendment on the 2022 ballot, and Nebraska Senator Anna Wishart (who is also part of that group) introduced Legislative Bill 474 to legalize medical cannabis in the state in January this year.

“There are few things in this world that won’t kill you if you do or take too much. The cannabis plant is one of those. Facts matter.”

That’s probably taking things a little too far too, but the sentiment is understood.

Concerning her bill, the Senator said:

“This bill is not going to fail because of a lack of compromise. If this bill fails to pass, it is because of political pressure from a few who wield their power to stamp out the will of the people.”

Previous articleDo Hemp Farms Stink?
Next articleAustralia’s Little Green Pharma Powering Ahead
Gillian Jalimnson
Gillian Jalimnson is one of Hemp Gazette's staff writers and has been with us since we kicked off in 2015. Gillian sees massive potential for cannabis in areas of health, energy, building and personal care products and is intrigued by the potential for cannabidiol (CBD) as an alternative to conventional treatments. You can contact Gillian here.
RELATED ARTICLES
News