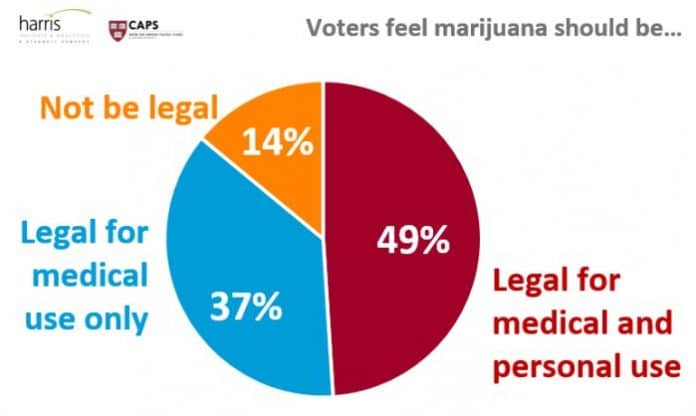 In a result some will find surprising, 57% of voters surveyed said legalizing marijuana ” makes societies better”.

The related questions asked in the survey were:

The survey was carried out between July 19-24, 2017 among 2,032 registered  U.S. voters. Results were weighted where necessary to align them with their actual proportions in the population.

The Harvard-Harris Poll is a monthly poll published by Harvard’s Center for American Political Studies (CAPS) and Harris Insights and Analytics.

Another recent survey, this one in conservative Utah, indicated more than three-quarters of Utahns support a medical marijuana ballot initiative and just 10% strongly opposed it. An earlier survey in the same state indicated similar results; with 73% in favour of a proposed statewide ballot measure enabling doctors to recommend medicinal cannabis to treat serious illnesses.

Survey after survey indicates strong support in the USA for legal medical cannabis. Already, more than half of U.S. states have thumbed their noses at the federal government’s stance and made cannabis in some form legal for medicinal purposes. The 50% milestone was reached in June last year.

A full and regularly updated list of U.S. medical cannabis states can be viewed here.

With the medical marijuana genie well and truly out of the bottle, the U.S Federal Government will have a hard time trying to stuff it back in – but that doesn’t mean to say it won’t continue to try. Beleaguered U.S. Attorney Jeff Sessions has been giving it his best shot; but his efforts to date haven’t had much success.

Meanwhile, many other countries (including Australia) watch closely to see how it all pans out in the USA.