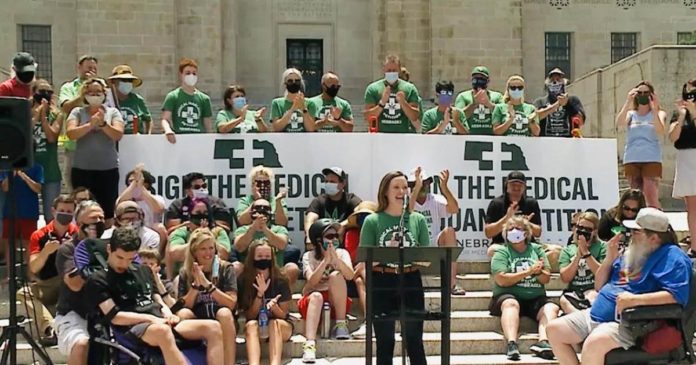 Nebraskans for Medical Marijuana is celebrating after receiving confirmation its amendment will appear on the November ballot.

Back in July we reported Nebraskans for Medical Marijuana delivered more than 182,000 petition signatures supporting a ballot initiative to enable patients access to medical marijuana as recommended by their physician or nurse practitioner. It also lays the foundation for a regulated market for producers and dispensaries in the state. The wording of the petition can be found here.

The result was quite a feat given the situation with the COVID-19 pandemic that impacted on their efforts. What it demonstrates is not only the group’s passion on the issue, but also that of Nebraskans.

That passion has paid off – Nebraskans for Medical Marijuana announced last week it had received word they had made it over the line.

“This is an unbelievable achievement, and we’re ecstatic,” said the group in a Facebook post. “But there’s no time to waste. Nebraskans will begin casting their ballots next month, and we have to quickly ramp up our efforts to fight back against a very well-funded opposition campaign.”

The original announcement stated there was no doubt the constitutional requirements had been met for signature collection, but the ballot hadn’t been certified at that point and NMM were still waiting on final word from Secretary of State Bob Evnen. That came the following day.

“Just heard from the SOS, Secretary Evnen will not withhold the medical marijuana issue from the ballot. Way to go Nebraska.”

The Secretary reportedly also said he had “no doubt” that his decision will be challenged in court and mentioned the decision in favor of allowing it on the ballot was a close call.

The first court challenge was filed on Friday local time.

Nebraska law allows citizens to bring forward constitutional amendments for approval on the ballot if enough signatures can be gathered – at least 10% of the electorate. To qualify for the 2020 ballot, approximately 122,000 signatures were needed by July 2.

According to the Marijuana Policy Project, not only is there no medical marijuana program in the state currently, there are also no other allowances for patients in Nebraska.