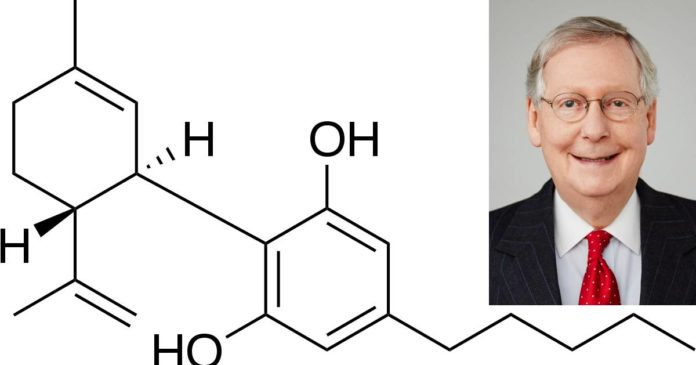 Currently it is the FDA’s official view that it is illegal for CBD to be sold in interstate commerce as a food additive or dietary supplement. However, there are no formal regulations in place as yet and those may be quite some time off.

While the FDA is “excited” by the potential of CBD, it’s going to take its time on developing regulations – and this doesn’t impress Senator McConnell, who was the driving force behind the Hemp Farming Act of 2018.

According to U.S. Hemp Roundtable, proposed language introduced by the Senator to be included in a congressional spending report would expedite matters and force the FDA to back off on enforcement of its current guidance.

It would compel the FDA to provide Congress a report within 90 days that outlines its progress on developing an enforcement discretion policy – and issue that policy within 120 days.

“Such enforcement discretion shall be in effect until FDA establishes a process for stakeholders to notify FDA for use of CBD in products that include safety studies for intended use per product, and makes a determination about such product,” states part of the wording – the full language can be viewed here.

“In the short run, the McConnell language would help lift the current regulatory cloud that’s been discouraging financial institutions to work with CBD companies, and that’s encouraged some local government officials to suggest that CBD is illegal in their state,” says Hemp Roundtable, which worked with Senator McConnell on the wording.

Hemp Roundtable is a coalition of dozens of hemp companies covering all aspects of the industry from seed to sale that was established in 2017. Its mission includes seeing hemp and popular hemp-derived products such as cannabidiol (CBD) fully legalised in every state.

Previous articleAnother Study To Examine Medical Cannabis “Entourage Effect”
Next articleCannabidiol Caveat Emptor
Terry Lassitenaz
Terry Lassitenaz writes exclusively for Hemp Gazette and has done so since the site launched in 2015. He has a special interest in the political arena relating to medical cannabis, particularly in Australia, and addressing the many myths surrounding this incredibly useful plant. You can contact Terry here.
RELATED ARTICLES
News