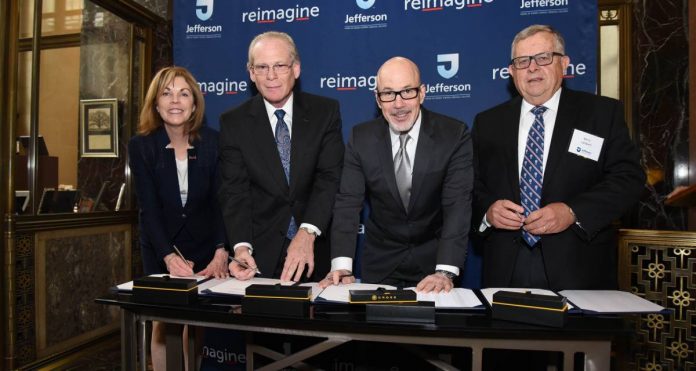 The philanthropist pair have provided a USD $2 million gift to Thomas Jefferson University to advance medical solutions utilizing industrial hemp and its derivatives.

“Research into hemp is important to me and Joy, because we’ve seen it work,” says Barry Lambert, who is also chairman of Australian hemp company Ecofibre. “Medicine derived from hemp gave relief to my granddaughter’s seizures, and our hope is that this new fund will provide resources and inspiration for innovations and products that help others.”

Mr Lambert’s granddaughter was previously experiencing multiple seizures a day as a result of Dravet Syndrome (previously known as severe myoclonic epilepsy of infancy or SMEI); a rare and severe form of epilepsy. A cannabidiol-based preparation resulted in a major improvement in her condition. However, it hasn’t been an easy road – the granddaughter’s father was charged and found guilty in 2017 of growing cannabis to be used for the child’s medicine.

Jefferson’s Larry Merlis says the donation will open up new avenues for hemp-based solutions to address health and resource sustainability issues. While industrial hemp has very low tetrahydrocannabinol (THC) levels, it can be high in cannabidiol (CBD), which is increasingly being sought for its potential benefits in treating or managing various conditions.

This isn’t the first time Thomas Jefferson University has benefited from the Lamberts’ generosity. They donated USD $3 million to the institution to support its Center for Medical Cannabis Education and Research (which appears to have been renamed to the Lambert Center for the Study of Medicinal Cannabis and Hemp) in 2016.

The Lamberts have also provided a huge amount of financial support to cannabis research in Australia, previously gifting AUD $33.7 million (~USD $23.7 million at current exchange rates) to the University of Sydney to fund the Lambert Initiative; a project researching the use of cannabinoids in treating a range of diseases. The project has been funded from 2015 – 2024.

The Lambert Initiative’s aim is to optimise safe and effective cannabinoid therapeutics into mainstream medicine in Australia – and beyond its shores. As well as paediatric epilepsy, the initiative is also looking at the role cannabis can play in treating or managing cancer, chronic pain, obesity, neurological and mental health disorders.

Previous articleU.S. Universities Gifted Millions For Phytocannabinoid Research
Next articleIllinois Ag Department Swamped With Industrial Hemp Applications
Gillian Jalimnson
Gillian Jalimnson is one of Hemp Gazette's staff writers and has been with us since we kicked off in 2015. Gillian sees massive potential for cannabis in areas of health, energy, building and personal care products and is intrigued by the potential for cannabidiol (CBD) as an alternative to conventional treatments. You can contact Gillian here.
RELATED ARTICLES
News