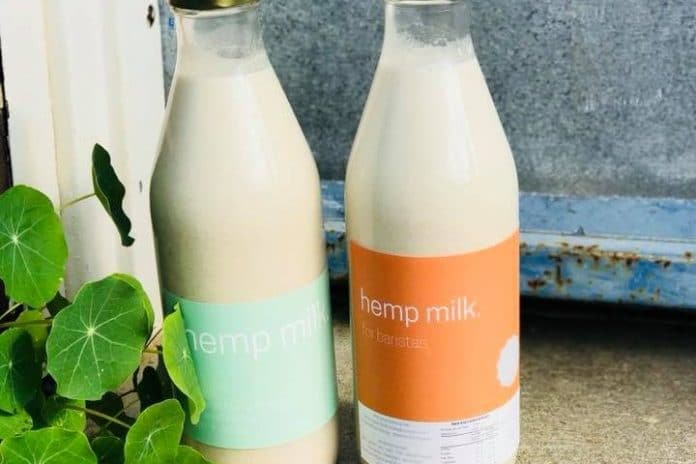 Hemp milk has been so popular in Western Australia that one company is now looking to move into the east coast market, but a fight may be brewing over what these products can be called.

Hemp milk is produced from hulled hemp seeds that are soaked and ground in water, which results in a milky type liquid said to have a nutty/creamy flavour or similar to soy milk.

Once illegal in Australia, the ban on hemp milk and other hemp seed food items was lifted last year and products have been appearing rapidly in the past few months.

One Western Australian hemp milk entrepreneur has experienced such high demand, he’s now looking to enter the east coast market – but shelf life is an issue.

“There is a very high demand on the east coast and we’re looking at producing out of Sydney as well,” says Liam O’Neil of Re:Fresh Juice + Cleanse. “With only eight days’ shelf life it doesn’t travel very far, so at the moment we can only service WA.”

Mr O’Neil is currently investigating pasteurisation technology to extend his product’s shelf life. Pasteurisation involves the use of heat to eliminate pathogens.

One of the attractions of hemp milk aside from it being non-dairy is its nutritional value. A glass of Re:Fresh Juice + Cleanse’s hemp milk is said to contain 900mg of Omega-3 + 2800mg Omega-6 fatty acid, all ten essential amino acids, a high level of calcium, zero cholesterol and various vitamins and minerals.

Pricing of hemp milk doesn’t seem to be a problem. Mr O’Neil’s product  is an expensive drop, currently priced at $11 for one litre.

While the future looks bright for Australia’s hemp milk industry, vendors being able to continue call their product “milk” is not assured. There’s a battle in the USA led by that nation’s dairy industry as to what can be called milk, and similar rumblings in Australia.

“The fact is it’s not milk if it doesn’t come from a cow, it’s not from the dairy industry so it shouldn’t be able to be called milk,” said Nationals deputy leader Bridget McKenzie last month.

Previous articleCoca Cola Eyeing Cannabidiol Infused “Wellness” Drinks
Next articleImpression – From Mouthguards To Cannabinoid Chewing Gum
Terry Lassitenaz
Terry Lassitenaz writes exclusively for Hemp Gazette and has done so since the site launched in 2015. He has a special interest in the political arena relating to medical cannabis, particularly in Australia, and addressing the many myths surrounding this incredibly useful plant. You can contact Terry here.
RELATED ARTICLES
News