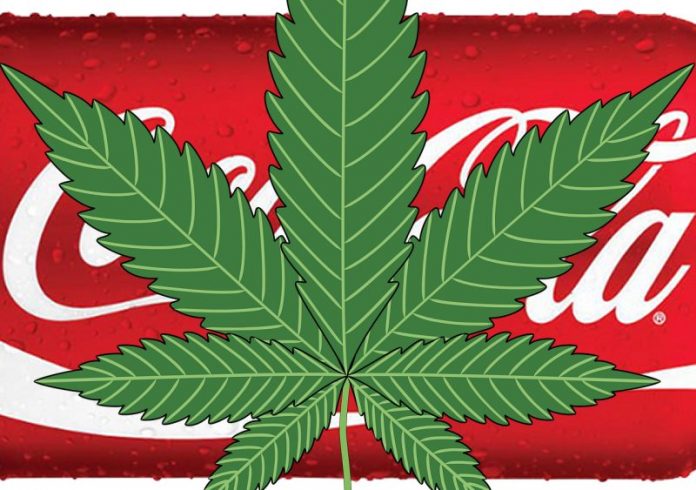 The interwebs have been abuzz with news that the giant of soft drinks, Coca Cola, has been keeping tabs the evolution of cannabidiol infused beverages – and hasn’t discounted getting involved itself.

Cannabidiol (CBD) is a non-intoxicating component of cannabis that is being pursued for its potential in managing or treating a range of conditions, including inflammation and pain. It’s already been added to various food items and increasingly, a range of drinks  – sometimes referred to as “wellness” beverages.

“We are closely watching the growth of non-intoxicating CBD as an ingredient in functional wellness beverages around the world. The space is evolving quickly. No decisions have been made at this time.”

Bloomberg reports that one of the cannabis players Coca-Cola is talking to is Canada’s Aurora Cannabis (TSE:ACB).

But isn’t cannabis still illegal at a federal level over the border in the USA? Yes, but CBD can also be extracted from industrial hemp – and some hemp strains have very high levels of the compound. In July this year, the U.S. Senate passed the Agriculture Improvement Act of 2018 (Farm Bill), which included the Hemp Farming Act of 2018.  Assuming it goes all the way through, the Hemp Farming Act would remove industrial hemp from Schedule I of the Controlled Substances Act.

While the Act may go some way to addressing the legal challenges in the USA, in countries such as Australia, CBD is tightly controlled. We can’t expect to see drinks containing CBD on supermarket shelves in the land down under anytime soon; from Coca Cola or anyone else.

While all this buzz about “cannabis coca cola” (the company hasn’t indicated in any way it will be added to a Coke version ) is apparently at the very early stages (some sources state otherwise), the news certainly didn’t do any harm to Aurora Cannabis’s share price, which was up 16.86% at market close yesterday. Aurora’s CEO stated that Coca Cola isn’t the only beverage maker the company is in discussions with and Aurora fully intends entering the infused-beverage space.