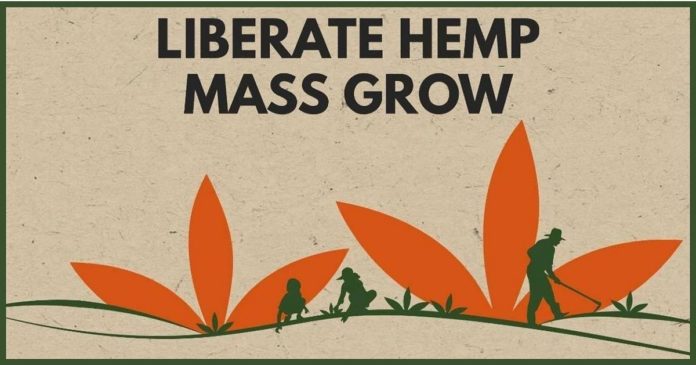 A UK group is planning to “overgrow the regime” with a hemp “mass grow” day on June 18. But it’s not without its risks.

It’s generally illegal to grow hemp in the UK under the Misuse Of Drugs Act 1971. However, farmers can gain an industrial hemp licence limited to producing seed and fibre – but it’s a difficult process.

A fortunate few can also get special licences for the cultivation and production of hemp derived CBD. While there’s a huge market for cannabidiol in the UK, most of these “home-grown” products are exported while the local market is supplied by imported products. It’s a bit crazy.

Back in 2019, we reported Hempen – a hemp cooperative in the UK – was compelled to destroy its Oxfordshire hemp crop as a result of having its licence cancelled. Then last year, Hempen put out a public call for UK hemp farmers to rebel against the UK’s strict hemp laws – to “overgrow the regime”.

It’s not clear if the co-op has any involvement in this new initiative – a “mass grow” on June 18 that extends beyond farmers to members of the general public.

“Together we can overgrow the hemp licencing regime, liberating this miracle crop for the good of all life on Earth,” states the Liberate Hemp website. “The hemp licensing regime is not fit for purpose and is stifling the green economy, British farming and public health.”

The event will occur at a site “near Bristol”, a city straddling the River Avon in the southwest of England. Among the items attendees are requested to bring is potted hemp to plant or seeds in soil and biodegradable pots – but extra will be on hand if needed.

There isn’t a great deal more information publicly available about the event, and given its nature that’s understandable. After all, it is an act of civil disobedience and those attending will be at risk of prosecution.

“If the government will not get out of the way, then together we have no choice but to grow hemp without them and render the licensing regime redundant,” states Liberate Hemp.

While it may be optimistic to assume this event will directly move the needle any time soon, it will hopefully draw more attention to the issue of hemp licensing in the UK; and the continued unfair treatment of this incredibly beneficial crop.

Previous articleStudy: High Dose Cannabidiol And Driving No Problem
Next articleNorth Carolina Closer To Excluding Hemp From Controlled Substances Act
Gillian Jalimnson
Gillian Jalimnson is one of Hemp Gazette's staff writers and has been with us since we kicked off in 2015. Gillian sees massive potential for cannabis in areas of health, energy, building and personal care products and is intrigued by the potential for cannabidiol (CBD) as an alternative to conventional treatments. You can contact Gillian here.
RELATED ARTICLES
News