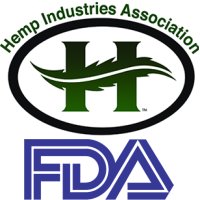 A recent spate of warning letters sent to some U.S. vendors selling cannabidiol products has elicited a response from the USA’s Hemp Industries Association (HIA).

Not so says the HIA.

“It is the position of the HIA that legal hemp products containing CBD were marketed as foods and dietary supplements long before cannabidiol formulations were submitted to the FDA for testing as a ‘new drug.’,” says part of a statement from the Association. The HIA also points out the Dietary Supplement Health and Education Act of 1994 explicitly defines ‘supplements’ as an extract of a botanical.

The HIA’s claims appear correct. A quick consultation of that all-knowing oracle, Google, reveals cannabidiol being marketed as a dietary supplement in 2010 – and perhaps even earlier (we didn’t go back any further).

The HIA has accused the FDA of bias and urged companies sent warning letters to revise their labeling and remove any mention of medical claims.

Previous warning letters from the FDA focused on the health claims being made by some vendors. That cannabidiol is now excluded as a dietary supplement is a new turn of events and may perhaps be legally challenged.

No doubt there will be a number of CBD vendors making some changes to their web sites this weekend.

““There is great potential for the CBD market to expand in the U.S., but we need to move forward as an industry on a path that defines cannabidiol products as dietary supplements, much like multi-vitamins and herbal products,” said HIA Executive Director, Eric Steenstra.

The Hemp Industries Association has been representing businesses, farmers, researchers and investors working with industrial hemp since 1994.

Cannabidiol is a non-intoxicating cannabinoid that may be useful in treating several forms of epilepsy and managing symptoms of conditions including Multiple Sclerosis (MS). One of the few FDA-approved marijuana derived drugs is based on cannabidiol.

Previous articleVirginia Green Lights In-State Cannabidiol Production
Next articleKentucky Expands Industrial Hemp Program
Terry Lassitenaz
Terry Lassitenaz writes exclusively for Hemp Gazette and has done so since the site launched in 2015. He has a special interest in the political arena relating to medical cannabis, particularly in Australia, and addressing the many myths surrounding this incredibly useful plant. You can contact Terry here.
RELATED ARTICLES
News