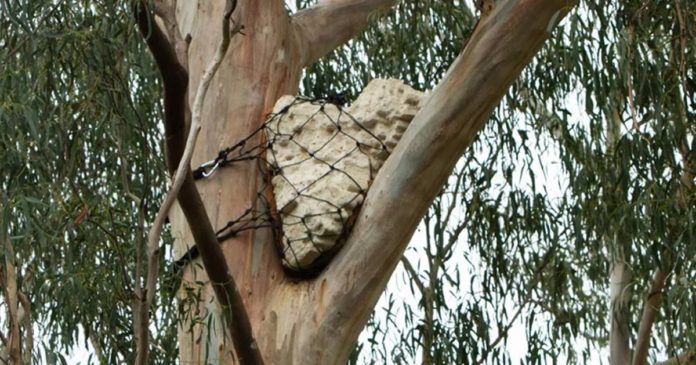 Low-tech meets high-tech – a device incorporating hemp is being trialed in Australia in the hope it will support urban wildlife with more suitable homes.

According to University of Melbourne researchers, more than thirty percent of threatened species live in urban areas – but many lack suitable shelter. Hollows that develop in the trunks and branches of trees are havens for wildlife, but these are becoming fewer and further between, especially in cities and suburban areas.

While artificial hollows such as nest boxes can help, they aren’t particularly durable and some animals turn their noses up at them.

The researchers have turned to computer-aided design and manufacturing to improve the design of artificial hollows, drawing inspiration from natural habitat structures used by Powerful Owls for nesting – tree hollows and termite nests. The largest of Australia’s owls, the Powerful Owl is listed as endangered in Victoria.

One of the modules being tested is a CNC-cut wood-cement design covered by hempcrete, which is a mix of the woody core of the hemp plant (known as hurd), lime and water. Hempcrete has been used for various building applications for thousands of years.

Wood cement was selected for its strength-to-weight, porosity and ease of cutting. The hempcrete created a strong and durable shell with the additional attributes of being non-toxic, fire and termite resistant, insulative and moisture repellent – and carbon negative.

The prototype hollows have been installed at various sites across Melbourne and are equipped with sensors collecting data on microclimate and habitation.

“It will take some time to know if computationally designed hollows will attract powerful owls,” they state. “Other species, including lorikeets and possums, have shown interest in using our hollows. This is a promising sign for conservationists and land managers who are looking to support local biodiversity or increase the prey base for the owls.”

A detailed description of the initiative and designs have been published in the British Ecological Society journal, Methods in Ecology and Evolution.

Previous article
Little Green Pharma Seals Italian Medical Cannabis Deal
Next article
US Parents’ Attitudes To CBD For Kids
Gillian Jalimnson
Gillian Jalimnson is one of Hemp Gazette's staff writers and has been with us since we kicked off in 2015. Gillian sees massive potential for cannabis in areas of health, energy, building and personal care products and is intrigued by the potential for cannabidiol (CBD) as an alternative to conventional treatments. You can contact Gillian here.
RELATED ARTICLES
News