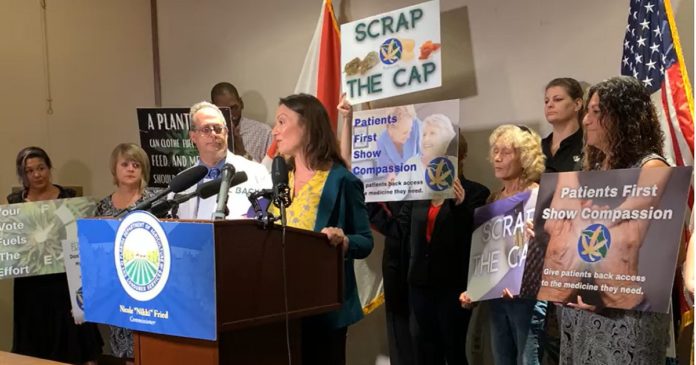 Brought into play on August 29 after claims of irresponsible prescribing by some doctors, Emergency Rule 64ER22-8, Dosing and Supply Limits for Medical Marijuana, set new daily THC dosing and 70-day supply limits. It also sets a limit of 2.5 ounces of smokable cannabis in a 35-day period.

There was no public consultation involved and patients and doctors had less than three days advance notice of the change.

Commissioner Fried has called on the Florida Department of Health (DOH) and its Office of Medical Marijuana Use (OMMU) to put the state’s 700,000 patients first; stating the changes have caused chaos, confusion and panic.

“This rule change is unnecessary, its implementation poorly noticed, and its impacts extremely harmful with hundreds of thousands of patients in Florida no longer able to access their medicine in the quantities they need for efficient treatment as determined by their doctors,” said Ms. Fried.

The Commissioner sent a letter late last week to Florida’s Surgeon General, Dr. Joseph A. Ladapo, who oversees the Office of Medical Marijuana Use. Part of the letter states:

“Medical cannabis is medicine and I hope that DOH and OMMU will reverse these harmful restrictions and instead, work to improve the program in a way that puts patients and equity first and that provides patients and providers with a seat at the table when decisions impacting their care are being discussed.”

The letter accuses the state inserting itself into nuanced decisions made between patients and their health care providers. Commissioner Fried certainly hasn’t minced words, stating the situation:

“… reflects a lack of understanding of medical cannabis by DOH and OMMU at best and is an act of cruelty at worst.”

Niki Fried has been a staunch supporter of hemp and medical cannabis for years – and the Commissioner is also fighting for full legalization in her state.

A related petition has been organised by the Florida Cannabis Action Network (FLCAN) to send a strong message to the state’s governor, Ron DeSantis.

Previous articleNZ Medical Cannabis Company Looking To Raise Cash
Next articleGreenfern Continues Hemp Seed Research With Grant Assistance
Gillian Jalimnson
Gillian Jalimnson is one of Hemp Gazette's staff writers and has been with us since we kicked off in 2015. Gillian sees massive potential for cannabis in areas of health, energy, building and personal care products and is intrigued by the potential for cannabidiol (CBD) as an alternative to conventional treatments. You can contact Gillian here.
RELATED ARTICLES
News