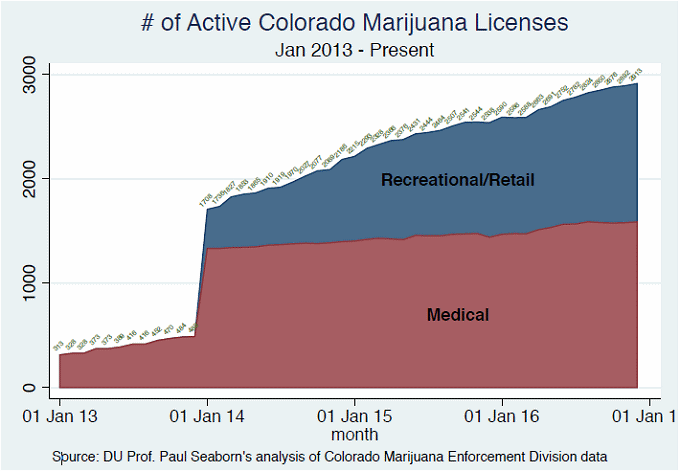 There are now close to 3,000 active marijuana business licenses in Colorado, USA, according to a recently released market report on the state’s cannabis sector.

The report was authored by University of Denver’s Assistant Professor Paul Seaborn, from DU’s Daniels College of Business.

“When recreational marijuana was legalized in January 2014, there were 1,708 active licenses in Colorado, so the state has experienced a 70 percent increase in licenses in just under two years,” stated Professor Seaborn.

The huge spike in licenses as pictured above occurred in January 2014 after the passing of passing of Amendment 64, which legalised recreational marijuana in the state.

Currently, 54% of active licenses in Colorado are connected to medicinal cannabis businesses and 46% for recreational/retail businesses. The City and County of Denver accounts for more than 1/3 of state’s active marijuana licenses.

While the marijuana sector is certainly booming in Colorado, Professor Seaborn continued growth in licenses may level off as some parts Colorado, including Denver, have put caps in place on the numbers available.

There is also some uncertainty in the state’s industry concerning the actions of the incoming President, Donald Trump.

Colorado’s cannabis industry is having a significant impact in many areas, including electricity consumption. Early last year, electricity use in Denver was reported to be increasing at the rate of 1.2 percent a year, with 45 percent of that increase attributable to marijuana-growing facilities.

November receipts (Excel) of all marijuana taxes, licenses and fees indicate USD $18,425,864 was collected for October, up around 39% on last October. Tax totals for this year may exceed 2014 and 2015 combined.

According to the Denver Post, Approximately $1.1 billion in legal sales of recreational/medical marijuana and related products were sold in Colorado this year through to the end of October.