HomeNewsTrump Vs. Clinton On Medical Cannabis

Trump Vs. Clinton On Medical Cannabis 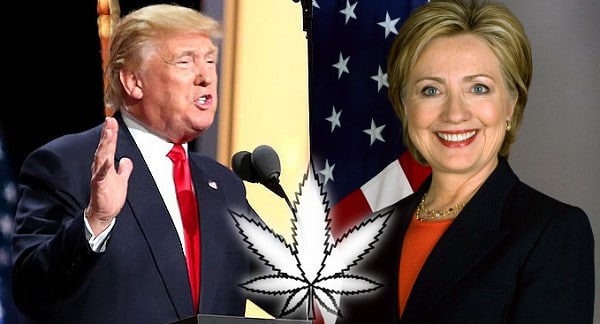 The U.S. Presidential election lead-up has been like none other – and one of the many issues to sway voters is in relation to medical cannabis.

As well as electing a new President, ballot papers in four states – being Florida, Montana, North Dakota and Arkansas – will ask voters whether patients should be allowed access to medical cannabis, or to expand programs already in place.

But the main event of course is the next POTUS – and it’s really come down to a choice between Donald Trump and Hillary Clinton.

So where do both currently stand on the issue of medicinal marijuana?

Ms. Clinton has called for removing marijuana from the Schedule 1 list of drugs; which will provide greater research access. She acknowledges there’s been “great anecdotal evidence” regarding the efficacy of cannabis medicines in treating some conditions, but says more research is needed.

The Democrat also supports states that are moving towards legalization.

Mr. Trump has sent out some conflicting and somewhat vague messages over the months about where he stands on the issue – but that’s par for the course.

At this point in time, Donald Trump supports states making their own decisions on legalizing cannabis for medical use. As to his attitude generally about medicinal marijuana, he is on record as saying he is ” in favor of it a hundred percent”. It seems Mr. Trump has known some patients who have used it medicinally and acknowledges “it really does help them”.

Both candidates are little wishy-washy and lacking any real policy on this important topic; but with both indicating some level of support; it would appear to be good news for the U.S. industry and patients – or at least not bad news at this point.

The Marijuana Policy Project has graded all candidates. Hillary Clinton gets a B+ and Donald Trump, a C+. The candidates given an A+ are Jill Stein (Green) and Gary Johnson (Libertarian).

What about the vibe of the U.S. medical cannabis industry? Had the election been held back in September, it seems the industry would have likely elected Hillary Clinton.

Previous articleBitcoin A Solution For The Hemp And Cannabis Industry?
Next articleMedical Cannabis Trial For Denmark
Steven Gothrinet
Steven Gothrinet has been part of the Hemp Gazette in-house reporting team since 2015. Steven's broad interest in cannabis was initially fueled by the realisation of industrial hemp's versatility across multiple sectors. You can contact Steve here.
RELATED ARTICLES
News