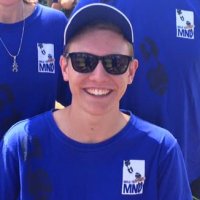 A young Australian sufferer of the rare condition Stiff Person Syndrome is lobbying the New South Wales government for access to medical cannabis.

Nearly two-thirds of SPS patients cannot function independently and the condition causes sudden death in around 10% of sufferers. Complicating treatment is the fact that little is understood about Stiff Person Syndrome.

Treatment is usually in the form of diazepam and benzodiazepines; which have risks associated with long term use, including addiction.

20 year-old Australian Ben Oakley is one a handful of sufferers in the country. His parents, both former nurses, say he has found relief through the use of cannabis oil.

“The pharmaceuticals that he was being treated with were stopping him from getting worse, not making him better,” states his mother on a petition on medical marijuana started last year . “Since we started him on medicinal cannabis he continues to improve and actually has quality of life”

However, each time Ben procures and uses the cannabis oil, he risks arrest.

‘I could be arrested for something which has changed my life. Which has saved my life. How stupid is that?”

Ben has called on the NSW state parliament to make access medical cannabis legal and easier.

“It’s incredible how much it [cannabis oil] can change people’s lives – not just for the rarer conditions,” said Mr. Oakley in an interview with 7 News.

Ben is hoping for 10,000 signatures on the petition so the issue will be raised in Parliament. At the time of writing, just over 5,000 people had signed.

In January, the New South Wales government announced it would be making a cannabis based medicine (Epidiolex) accessible; but initially only to some children suffering from drug-resistant epilepsy and terminally ill adults.

The government says it is “committed to developing a better understanding of the potential for cannabis and/or cannabis products to alleviate symptoms or potentially treat a range of debilitating or terminal illnesses.”

It has established the Centre for Medicinal Cannabis Research and Innovation and is investing $9 million on clinical trials of cannabis products  over the next 5 years.

Previous articlePositive Study Results For Cannabidiol Medication
Next articleCould Medical Cannabis Cure PTSD?
Terry Lassitenaz
Terry Lassitenaz writes exclusively for Hemp Gazette and has done so since the site launched in 2015. He has a special interest in the political arena relating to medical cannabis, particularly in Australia, and addressing the many myths surrounding this incredibly useful plant. You can contact Terry here.
RELATED ARTICLES
News