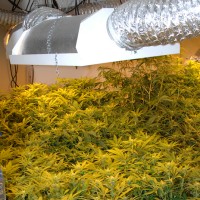 Legal marijuana is the most energy intensive agricultural crop in the USA according to New Frontier.

According to the cannabusiness research firm’s new report; Illuminating Cannabis: The Future of Energy in the Cannabis Industry, production of marijuana consumes one percent of the country’s electrical output; at a cost of $6 billion annually. The energy usage is the equivalent to power needs of 1.7 million homes.

“Both operators and legislators will need to be very mindful of the high energy demands of the legal cannabis industry,” said New Frontier Founder and CEO Giadha Aguirre De Carcer; who stated the current consumption trend wasn’t sustainable.

” Companies that adopt the most energy efficient practices will have an important cost advantage as the industry becomes more competitive and prices fall, and states that prioritize energy efficiency will reduce the fast -growing industry’s impact on the grid and on the environment.”

Dr. Evan Mills, Energy Analyst and member of the U.N. Intergovernmental Panel on Climate Change says indoor growing may have even greater negative consequences for the environment than illegal outdoor operations.

A city that is really feeling the impact is Denver, Colorado. Back in November we mentioned Denver’s electricity consumption has been increasing at the rate of 1.2 percent a year, with 45 percent of the increase from marijuana-growing facilities.

Energy costs can make up as much as fifty percent of wholesale price of marijuana. These costs can be somewhat mitigated through the use of LED lighting and solar power; the latter becoming more attractive with economical energy storage now on the horizon.

Unlike industrial hemp, medicinal marijuana is often grown indoors to maximise production of sought after compounds such as THC and cannabidiol (CBD). This requires the use of massive banks of cultivation lights, climate systems and watering controls.

However, it’s also been shown that commercial quantities of CBD can be extracted from industrial hemp. While not at the same levels of indoor grown medical cannabis plants, the greatly decreased overheads may see an increasing amount of cannabidiol being sourced from hemp plants in the future – particularly as new strains are developed offering improved yields of the compound.

Previous articleKentucky Expands Industrial Hemp Program
Next articleAustralian Medical Cannabis Legislation Passes
Terry Lassitenaz
Terry Lassitenaz writes exclusively for Hemp Gazette and has done so since the site launched in 2015. He has a special interest in the political arena relating to medical cannabis, particularly in Australia, and addressing the many myths surrounding this incredibly useful plant. You can contact Terry here.
RELATED ARTICLES
News