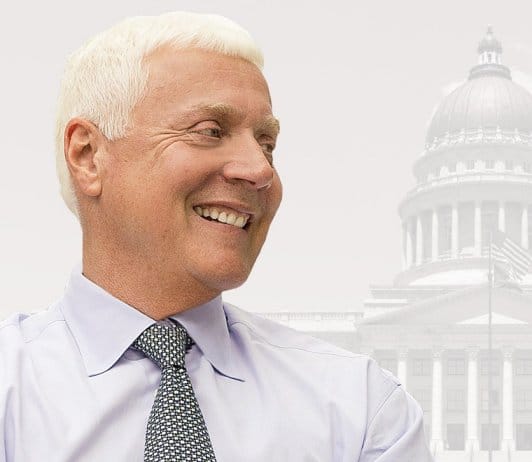 Mr. Weinholtz is a strong supporter of medical cannabis, but has been unable to clarify his position while his wife Donna was facing criminal charges for possession of marijuana.

Mrs. Weinholtz suffers from arthritis and degenerative spinal issues that at times left her bedridden for weeks.  Use of cannabis greatly relieved her pain.

Mrs. Weinholtz  pleaded guilty to possession of marijuana and  drug paraphernalia. She’ll serve a year of probation and pay a $3,800 fine.

“I, like many Utahns, made a deliberate and conscious decision to use cannabis knowing full well that it is against the law,” said Mrs. Weinholtz. “I have faith the law will change.”

With the legal action against his wife settled, Mr. Weinholtz is now unshackled and can state his position on medical marijuana.

According to WAPT news, the candidate stated current laws in Utah leave doctors with little choice but to prescribe opioid drugs, addiction to which have become an epidemic in Utah and elsewhere in the USA.

The statistics in Utah are quite frightening.

According to the Utah Department of Health, nearly a third Utah adults aged 18 years and older were prescribed an opioid pain medication between 2013-14. 24 individuals die from prescription drug overdoses in Utah each month and the state ranked 4th in the U.S. for drug poisoning deaths from 2012-2014.

“Yesterday I released my official proposal for battling opioid abuse as governor, which includes legalization of medical cannabis? Governor Gary Herbert has run away from the issue– Utah needs leadership, not excuses and evasion,” posted Mr. Weinholtz on his Facebook page.

Various studies have indicated the prevalence of opioid abuse appears to be much lower in states where medical marijuana is legal.

Utah is the USA’s Mormon stronghold. While considered a very conservative group, The Church of Jesus Christ of Latter-day Saints claims it isn’t entirely opposed to cannabis-based medicine.

Currently, Utah only permit patients with epileptic disorders to use cannabidiol (CBD); and in limited concentrations.

Previous articleMedical Cannabis Pesticide Contamination Concern
Next articleCanada’s Medical Cannabis Sector Booming
Terry Lassitenaz
Terry Lassitenaz writes exclusively for Hemp Gazette and has done so since the site launched in 2015. He has a special interest in the political arena relating to medical cannabis, particularly in Australia, and addressing the many myths surrounding this incredibly useful plant. You can contact Terry here.
RELATED ARTICLES
News