A Big Week For Medical Cannabis Supporters In Oklahoma 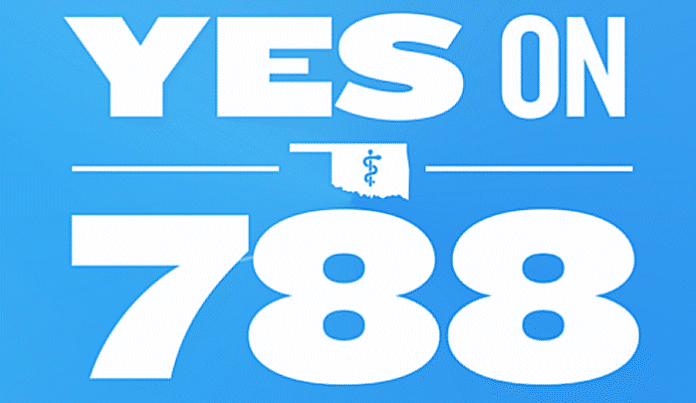 Medical cannabis supporters in the U.S. state of Oklahoma are celebrating after voters passed State Question 788, legalising the broad licensed use, sale, and cultivation of marijuana for medicinal purposes.

56 percent of voters supported State Question 788, while 43 percent opposed it.

As a result, medical cannabis will be made available to anyone in the state who has a physician’s recommendation. Additionally, a person in possession of a state issued medical marijuana license will be able to possess up to six mature marijuana plants and 6 seedlings.

Possession of cannabis products will also be quite generous – one ounce of concentrated marijuana, seventy-two ounces of edibles and eight ounces of plant material.

State Question 788 stipulates the Oklahoma State Department of Health will need to make applications for a  personal medical marijuana license available within 30 days of its passage, along with licences for commercial growers, processors and dispensaries. However, this means products won’t be available for purchase immediately given the cultivation and processing time involved with cannabis; not to mention all the regulatory hurdles that will need to be cleared – so it could be up to a year before that happens.

A tax on retail medical marijuana sales will be established at a rate of 7%, which should generate a significant amount of money for state coffers.

The full text of State Question 788 can be viewed here.

Oklahomans for Cannabis was unsurprisingly ecstatic with the poll result.

“There are no words to explain the pure joy that the organizers felt last night, so I can only imagine how happy those who NEEDED medical marijuana to function and to live happy and healthy lives feel at the news,” said the group, the driving force behind the Yes On 788 campaign.

While many may be celebrating, others weren’t happy – including Oklahoma Governor Mary Fallin.

“As I mentioned in previous public comments, I believe, as well as many Oklahomans, this new law is written so loosely that it opens the door for basically recreational marijuana,” said the Governor.

Governor Fallin is now considering how to proceed with integrating the necessary framework for the program.

While Governor Fallin may not be a fan of medical cannabis, she does support industrial hemp (from which cannabidiol can be extracted).

A bill creating the Oklahoma Industrial Hemp Agricultural Pilot Program was signed into law by Governor Fallin in April, who believes industrial hemp will provide a source of steady revenue for the state. The Pilot Program will be quite restrictive, so it may still be some years before the potential of the crop is fully exploited in the state.

Previous articleHuge Medical Cannabis Facility For Melbourne Airport
Next articleFarm Bill Passes U.S. Senate And With It, The Hemp Farming Act
Steven Gothrinet
Steven Gothrinet has been part of the Hemp Gazette in-house reporting team since 2015. Steven's broad interest in cannabis was initially fueled by the realisation of industrial hemp's versatility across multiple sectors. You can contact Steve here.
RELATED ARTICLES
News