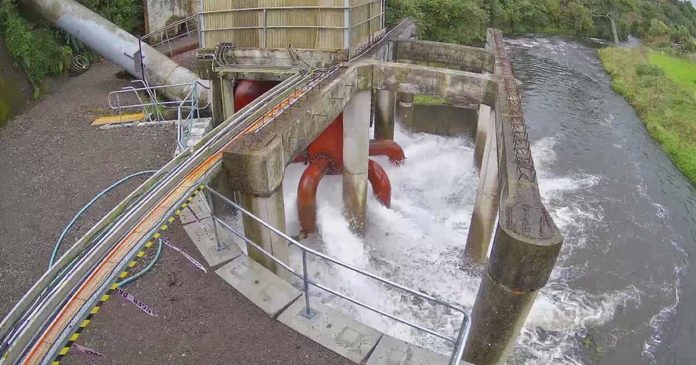 Medical cannabis can have a very heavy carbon footprint. Back in March, we reported on a U.S. study that found indoor cannabis cultivation can result in 2,283 – 5,184 kilograms of carbon dioxide per kilogram of dried flower. Outdoor and greenhouse cultivation is estimated to be significantly lower, at 22.7 kilograms and 326.6 kilograms respectively.

For indoor cultivators, there’s significant motivation for getting those emissions down. As much of the carbon footprint can be attributable to energy consumption, it makes financial as well as environmental sense to tackle the issue.

New Zealand’s energy supply is already around 80% renewable, but Greenfern Industries was able to take this further with the hydroelectric power station it owns on the Waingongoro River in Taranaki; situated alongside Greenfern’s research facility, indoor growing operation and processing facility.

“The highest overhead cost in a medicinal cannabis indoor growing operation is power,” said managing director Dan Casey. “While having access to cost-price power is a game changer for us in terms of how competitive it will make the price of our products, being able to grow our plants in a more environmentally friendly way is just as important to us.”

Mr. Casey has previously stated 60 percent of Greenfern Industries’ operational expense before the power station could be attributed to electricity.

Greenfern bought the Normanby Power Station in December last year after a successful crowdfunding campaign. However, the power station was not compliant, so there was significant cost in upgrading and modifying equipment to make it so. Taranaki Regional Council gave the green light for it to start generating power again last month.

Electricity generated surplus to Greenfern Industries’ needs will be sold back to the national grid.

The company is also constructing an aeroponic grow room that will use less water, require fewer nutrients and less electricity compared to conventional hydroponic systems. Aeroponics involves growing plants in an air or mist environment without the use of soil or an aggregate medium.

Greenfern’s other sustainability and waste reduction initiatives include a Bioresource Processing Alliance (BPA) funded project to make better use of hemp seed hulls.

Previous articleAnother Study To Examine Cannabis Product Potency
Next articleMore Cash For Australian Medical Cannabis Research
Gillian Jalimnson
Gillian Jalimnson is one of Hemp Gazette's staff writers and has been with us since we kicked off in 2015. Gillian sees massive potential for cannabis in areas of health, energy, building and personal care products and is intrigued by the potential for cannabidiol (CBD) as an alternative to conventional treatments. You can contact Gillian here.
RELATED ARTICLES
News