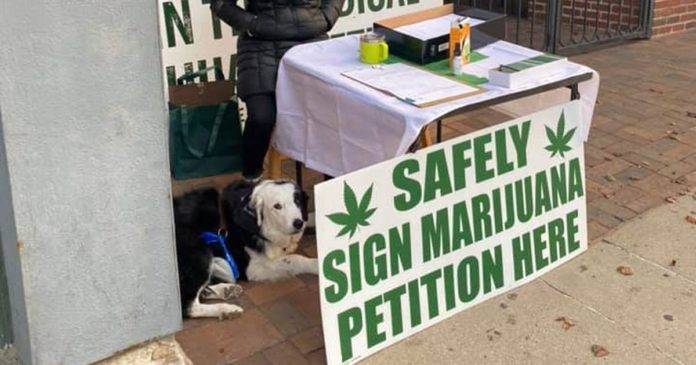 Nebraska medicinal cannabis supporters were back on the petition trail on the weekend, getting a head start on their 2022 ballot goal.

Just to briefly recap the situation to date..

Nebraska doesn’t currently have a medicinal marijuana program and there no other allowances for patients as the situation stands. Nebraskans for Medical Marijuana were (initially) successful in having an amendment relating to patient access appear on this November’s ballot after collecting more than 182,000 signatures.

But early in September, the Nebraska Supreme Court ruled the constitutional amendment must be removed from the ballot; stating it breached the “single subject” requirement. Immediately after, Nebraskans for Medical Marijuana said it would launch a new 2022 medical cannabis ballot initiative and in late September announced a single sentence constitutional initiative after consulting various legal experts. The wording:

“Persons in the State of Nebraska shall have the right to cannabis in all its forms for medical purposes.”

Keen to not waste any time, the group began printing petitions for its 2022 medical cannabis initiative last week.

“We were serious when we said we will not stop until cannabis is legal for our sick and suffering Nebraska friends and family,” the group stated.

Then on Saturday local time, volunteers were back out on the street gathering signatures.

“Make no mistake, our opposition will continue to try to stop our efforts, but we cannot give up. That’s exactly what our opponents want us to do,” said the group. “The patients and families of this state who are suffering without safe access to medical cannabis are worth fighting for, and that’s what we intend to keep doing.”

There’s no doubt that support for medical marijuana in the state is incredibly strong – and it’s across a range of demographics.

Nebraskans for Medical Marijuana says based on internal data analysis of signatures submitted in 2020, almost equal numbers of registered Republicans, Democrats and Independents from all age groups and from all 93 of Nebraska’s counties supported the initiative.

Previous articleMedical Cannabis And Its Impact On Alcohol Use
Next articleEIHA Welcomes Hemp THC Threshold Vote
Steven Gothrinet
Steven Gothrinet has been part of the Hemp Gazette in-house reporting team since 2015. Steven's broad interest in cannabis was initially fueled by the realisation of industrial hemp's versatility across multiple sectors. You can contact Steve here.
RELATED ARTICLES
News