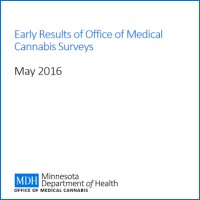 A survey carried out by the Minnesota Department of Health of medical cannabis users in the state has revealed some interesting results.

Currently there are 559 health care practitioners, 1442 patients and 176 carers registered for the state’s program.

From the patients’ viewpoint, medical cannabis appears to be working well. On a scale of 1 to 7, with 7 indicating a great deal of benefit,  88% of the 238 complete patient surveys provided a score of 4 or more.

69% of the 142 complete HCP reports chose a score of 4 or greater for their patients.

The highest benefit levels reported appear to have been among cancer patients.

The report states many patients  indicated the most important benefits were indirect; including improved quality of life, sleep, mobility, cognitive function or a reduced level of anxiety.

With regard to negative effects, these were reported in just 20% of patients and generally at a low level of intensity.

Where there does seem to be a significant negative impact isn’t in regard to the medication itself, but its cost.

Patients were asked to rate the cost of the medication they were using on a scale from 1, or very affordable, to 7, or very prohibitive. A total of 215 patients – 89% of all patient respondents – reported they found medical cannabis to be at least somewhat unaffordable.

“.. reports later in 2016 and early in 2017 will include both larger numbers of patients and broader sources of data, including patient reported changes in specific symptom severity scores over time,” it states.

Minnesota’s program was launched in 2014. In December last year, Minnesota’s Commissioner of Health  added intractable pain as a qualifying condition; which joined a list of other conditions including HIV, glaucoma, cancer treatment effects and seizures.

Early Results of Office of Medical Cannabis Surveys can be viewed in full here (PDF) and more information on the state’s program can be found here.

Previous articleGippsland Grandmother Avoids Jail Over Medical Cannabis
Next articleAussie Hemp Seeds In The USA
Terry Lassitenaz
Terry Lassitenaz writes exclusively for Hemp Gazette and has done so since the site launched in 2015. He has a special interest in the political arena relating to medical cannabis, particularly in Australia, and addressing the many myths surrounding this incredibly useful plant. You can contact Terry here.
RELATED ARTICLES
News