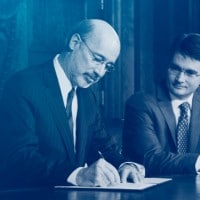 Pennsylvania has become the 24th US state to legalize medical marijuana after Governor Wolf signed Senate Bill 3 earlier today. But there’s a catch.

“I am proud to sign this bill that will provide long overdue medical relief to patients and families who could benefit from this treatment,” said Governor Wolf.

“I applaud members of both parties in the House and Senate who have come together to help patients who have run out of medical options and want to thank the thousands of advocates who have fought tirelessly for this cause,” said Governor Wolf.

The event had special significance for Senator Daylin Leach. Senator Leach said when he introduced a medical cannabis bill in 2010, he couldn’t get a single co-sponsor.

Mr. Leach said it was the most significant piece of legislation to pass in generations. “Marijuana is medicine and is coming to Pennsylvania”, stated the senator in a speech after the signing.

It’s certainly a big step in the right direction, but it could take between 18 and 24 months to complete the process of implementing the state’s program. However, the Pennsylvania Department of Health has started working on temporary regulations.

Secretary of Health Murphy said the department will be undertaking a full population study, which will include the geographical demographics and numbers of qualifying patients to determine accessibility to public transport in relation to travel to dispensaries.

Under the program, medical marijuana will be available in pill, oil, topical, vaporization or nebulization, tincture or liquid forms for patients suffering from any of seventeen conditions.

As we mentioned previously, up to 25 growers and processors and up to 50 dispensaries will be granted a license to operate in the state.

The Tenth Amendment Center said Pennsylvania joining the ranks of other states was significant on a federal scale.

“The lesson here is pretty straight forward. When enough people say, ‘No!’ to the federal government, and enough states pass laws backing those people up, there’s not much the feds can do to shove their so-called laws, regulations or mandates down our throats,” said the Center’s founder and executive director, Michael Boldin.