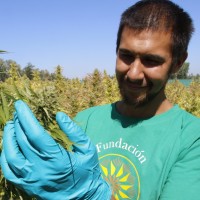 Thousands of people in Chile will benefit from the first major government-approved cannabis crop harvest in the country.

Harvesting of the country’s largest legal marijuana field (and also the largest in Latin America) began earlier this week.

The 6,440 marijuana plants will be processed and made into various phytopharmaceuticals, to be supplied free of charge to 4,000 patients in Chile suffering from cancer, chronic pain and other serious ailments.

Ana Maria Gazmuri, president of the Daya Foundation; which is overseeing the project, says she hopes it the first harvest of many more in Latin American countries.

The medicines will be part of several clinical studies.

“This is a collaborative platform that gestated with 20 municipalities, the University of Valparaiso, Laboratorios Knop and three health institutions, and we believe this is an important step forward in Chile in the generation of science and knowledge about the therapy of cannabis,” said Ms. Gazmuri.

Chile has a very long association with cannabis in its various forms. The use of medical cannabis‘ cousin, industrial hemp, dates back to as early as 1545 when the fibre was used to support then nation’s army and shipping.

However, the country started cracking down on cannabis earlier this century, then toughened its stance again in 2008; putting cannabis trafficking at the same criminal level as that of cocaine and heroin.

In 2014, the tide really began to turn. The Daya Foundation began planting cannabis for medicinal purposes that year with the government’s blessing. The crop was grown to benefit 200 cancer patients.

Last year,  a bill that would see Chileans able to grow up to six plants per household for “medical, recreational or spiritual reasons” passed the lower house of Congress and will now go before the Senate.

The Daya ( “compassion” in Sanskrit) Foundation is a nonprofit organization focused on researching and promoting alternative therapies to relieve human suffering.

Previous articleMedical Marijuana Reduces Opioid Use : Study
Next articleCannabidiol As An Anti-Depressant
Terry Lassitenaz
Terry Lassitenaz writes exclusively for Hemp Gazette and has done so since the site launched in 2015. He has a special interest in the political arena relating to medical cannabis, particularly in Australia, and addressing the many myths surrounding this incredibly useful plant. You can contact Terry here.
RELATED ARTICLES
News