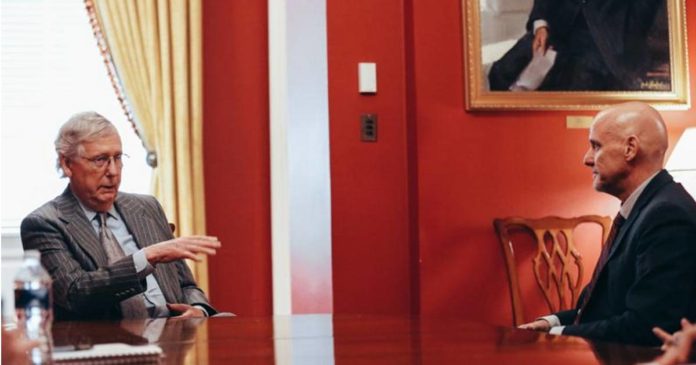 U.S. Senate Majority Leader Mitch McConnell was giving the US FDA another nudge on issues relating to hemp and cannabidiol last week.

The Kentucky Senator met with U.S. Food and Drug Administration Commissioner nominee, Dr. Stephen Hahn, in Washington. While not a lot of detail of the chat was provided, among  the topics discussed were hemp’s progress in Kentucky and the situation with cannabidiol (CBD).

“Like many Kentuckians who are taking advantage of hemp’s legalization, I am eager for FDA’s plans to create certainty for CBD products,” said Senator McConnell.

Back in September, the Senator was pushing the FDA to issue formal “enforcement discretion” on the sale of hemp CBD products until such time formal regulations and processes were in place; and there was a bit of a shove on those as well.

The FDA has previously stated while it’s excited about hemp, it appears to be in no hurry to come up with regulations; stating it needs to carry out more research.

For the 2019 growing season, the Kentucky Department of Agriculture approved 1,035 applications to cultivate up to 42,086 acres of industrial hemp, plus 2.9 million square feet of greenhouse space. It was a big jump from the 210 approved growers and 16,100 acres of industrial hemp able to be planted in 2018. The 2020 season is expected to be even bigger than 2019.

However, as promising as Kentucky’s hemp sector may be, it hasn’t been without its non-FDA related growing pains either –  as has been the case elsewhere in the USA.

The application period for the 2020 growing season kicked off 10 days ago, which will see the state move from its research pilot program to full commercial production under a USDA approved state plan. Kentucky was first cab off the rank to submit a plan to the USDA, which occurred within just a couple of hours of the 2018 Farm Bill being signed into law. Senator McConnell also played an important role in the Hemp Farming Act of 2018’s inclusion in the Farm Bill.

New rules and regulations for the state’s 2020 hemp licensing program will be made available after USDA approval of Kentucky’s plan; which can be viewed here.

Previous articleIdaho’s Governor Authorizes Transportation Of Hemp Across State
Next articleCann Group Switches To Staged Development Of Mildura Cannabis Facility
Gillian Jalimnson
Gillian Jalimnson is one of Hemp Gazette's staff writers and has been with us since we kicked off in 2015. Gillian sees massive potential for cannabis in areas of health, energy, building and personal care products and is intrigued by the potential for cannabidiol (CBD) as an alternative to conventional treatments. You can contact Gillian here.
RELATED ARTICLES
News