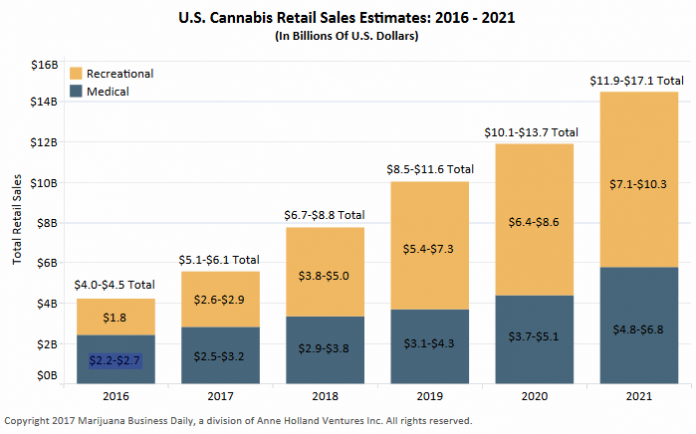 “Although this year is shaping up to be another one for the record books, the longer-term growth potential for the industry is even more promising,” says the report (PDF).

As with last year’s Factbook, this year’s publication is quite bullish – and with good reason. This is due to new markets starting sales in the next couple of years in addition to other states that legalize cannabis in the near future.

While the big profits appear to be in the recreational sector, profit margins for the unregulated and regulated medicinal marijuana dispensaries are around 18% and 15% respectively. The former’s higher figure is due to unregulated dispensaries not being faced with ongoing costs relating to legal and regulatory compliance.

The report also looks at costs involving cultivating cannabis for the wholesale market. Typical startup costs for businesses to have commenced operations in last three years were $42 per square foot – but there’s an understandable huge gap in costs between cultivation methods. The most expensive is indoor grow operations, which cost around $75 per square foot and the least expensive is outdoors at just $10 a square foot.

However, the attraction of indoor growing is the big bucks for product, which is usually of higher quality and can be grown year-round.

While investment costs may be high, it seems there is plenty of cash around for solid projects – with the usual caveat associated with medical cannabis in the USA that has been often stated over the last few months.

“The good news is that cannabis businesses will have more access to capital than in the past, assuming the Trump administration doesn’t send a chill throughout the industry,” states the report.

Investors and investment firms with a stake in the marijuana industry have placed $450,000 in cannabis companies to date on average.

May A Big Month For Industrial Hemp In Washington

DEA Announcement Regarding Hemp And Marijuana