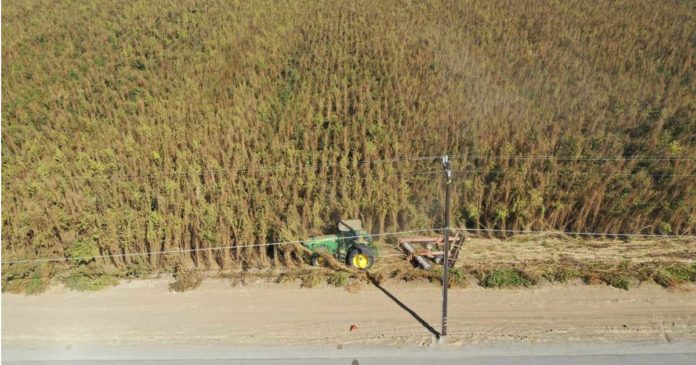 In California, Kern County Sheriff’s Office is claiming to have destroyed 10 million marijuana plants with a black market value of $1 billion. But there may be much more to this story.

“These illicit marijuana gardens were grown under the guise of legitimate hemp production,” states the Sheriff’s Office. “The Food and Agricultural Code and Health and Safety Code define industrial hemp has containing less than 0.3% THC content.”

Preliminary testing indicated levels of THC in the crops to be “well over the legal limit” for industrial hemp production and “were in fact cannabis.”

Well, of course they were cannabis plants. Hemp is cannabis, marijuana is cannabis.

As for “well over the legal limit”, the level of THC wasn’t noted. Even if they were three times over the limit (or even significantly more), they would still have zero recreational value. Apparently, it’s not until THC levels reach around 5% that they have any real black market value, unless dealers are looking to have some pretty angry customers.

The image above isn’t particularly good, but the plants in that instance were likely being grown as hemp – not as marijuana per se. Hemp for food and fibre purposes is planted closely together such as in the above and grows tall and skinny, as in the above. Cannabis cultivated as marijuana (or even hemp grown for cannabidiol) needs to be more spaced out and grows in a more bushy fashion.

It would seem 10 million plants over 459 acres would be intended for food/fibre purposes.

But assuming for a moment the growers of these crops had no intentions of growing “marijuana”, the sad fact is that once a crop is over the 0.3% THC content, it is considered marijuana legally speaking – so the Sheriff’s Office can make that call. While all the facts of this case are yet to be revealed, it is troubling the Sheriff’s Office may perhaps be making more of this than what it actually is in terms of intent and the crop’s value.

Regardless, it does send a strong warning to farmers that they need to be super-careful in selecting seed. While 459 acres of food/fibre hemp may not be worth anywhere close to $1 billion, having it destroyed would be a significant financial hit – and then there’s the added issue of potentially facing criminal charges.

It’s also tragic to see a huge amount of biomass that could have been used for a myriad applications simply being destroyed.

Previous articleHemp Processor Setting Up Shop In Virginia
Next articleLismore Medical Cannabis Facility To Provide Jobs Boost
Terry Lassitenaz
Terry Lassitenaz writes exclusively for Hemp Gazette and has done so since the site launched in 2015. He has a special interest in the political arena relating to medical cannabis, particularly in Australia, and addressing the many myths surrounding this incredibly useful plant. You can contact Terry here.
RELATED ARTICLES
News