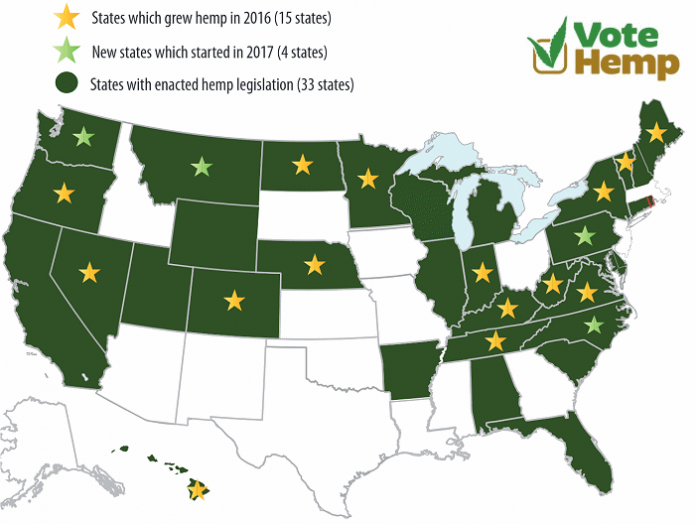 The amount of land being used to grow industrial hemp in the United States has more than doubled in 2017 compared to 2016.

According to figures provided by Vote Hemp, 23,343 acres were under cultivation this year; up significantly from 2016 when just 9,770 acres of land were being used to grow the plant.

“The majority of states have implemented hemp farming laws, in clear support of this crop and its role in diversifying and making more sustainable our agricultural economy,” said Eric Steenstra, President of Vote Hemp.

In 2017, licenses to cultivate industrial hemp were issued to 1,424 farmers in 19 states; and 32 universities conducted research on the crop.

While pleased with progress in the USA, Vote Hemp wants to see federal level support – or at least for the Feds to get out of the way. Currently, industrial hemp is lumped in with marijuana under federal law; even though it has zero value as a recreational drug.

“It’s imperative that we pass the Industrial Hemp Farming Act in Congress, so that we can grant farmers full federally legal rights to commercially cultivate hemp to supply the growing global market for hemp products,” said Mr. Steenstra.

Passage of Industrial Hemp Farming Act (H.R. 3530) would result in the Controlled Substances Act being amended to exclude industrial hemp with a THC concentration of no more than 0.3 percent on a dry weight basis from the definition of “marihuana”.

With so much more information now available, hemp’s myriad uses better understood and many industrial hemp myths busted, perhaps this time around common sense will prevail among lawmakers.

Previous articleMore Evidence Medical Cannabis Helps Manage Parkinson’s Disease
Next articleStrong Support For Medical Cannabis Among U.S. Veterans
Terry Lassitenaz
Terry Lassitenaz writes exclusively for Hemp Gazette and has done so since the site launched in 2015. He has a special interest in the political arena relating to medical cannabis, particularly in Australia, and addressing the many myths surrounding this incredibly useful plant. You can contact Terry here.
RELATED ARTICLES
News