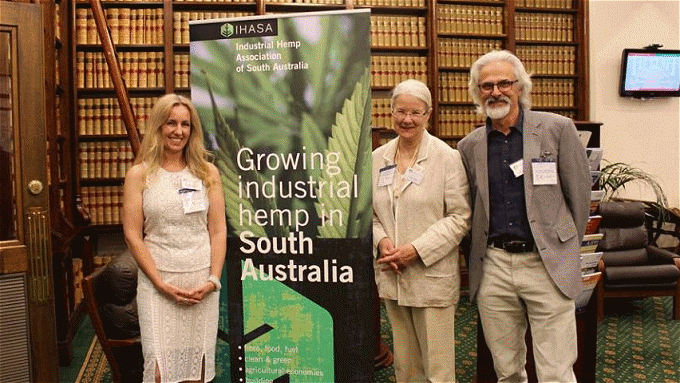 While hemp (non-food) products are legal in South Australia, the raw materials must be sourced elsewhere. South Australia remains the only state in the nation yet to legalise the growing of industrial hemp within its borders – but hopefully that may soon change.

“The products are already selling, the products are already being made but we are forcing them to source their raw materials from interstate and overseas. Talk about outsourcing jobs: it is no simpler than that. It is I think a policy no-brainer that we should progress, to ensure, like every other state in Australia has already done, that industrial hemp is able to be cultivated right here in South Australia.”

Industrial Hemp Bill 2016 would enable the cultivation of plants with less than half a per cent of THC (tetrahydrocannabinol), a level that is in line with the laws around the nation.

The Industrial Hemp Association of SA (IHASA) were also at Parliament House on Wednesday, participating in an exhibition demonstrating the myriad benefits of the plant to coincide with the reading of the bill. The goal of the exhibition was clear up confusion among the state’s politicians as to what industrial hemp is and isn’t.

The group stated tabling of the legislation was “an exciting day for IHASA, the committee, our members and fellow advocates.”

” I do not see it as simply a Greens’ bill; I see it as a bill for all South Australians if we are to be all true,” said Ms. Franks.

Industrial hemp could provide a significant boost to the state, particularly as it can be grown on marginal lands not suited to other forms of cropping. The water requirements of hemp is at least 14 times lower than that of cotton.

On a related note; in October, the South Australian Government indicated that it would support a medical cannabis industry within the state.

Previous articleCannabis Trial For Canadian Kids With Epilepsy To Commence Soon
Next articleCannabis Based Breast Cancer Treatment Breakthrough?
Gillian Jalimnson
Gillian Jalimnson is one of Hemp Gazette's staff writers and has been with us since we kicked off in 2015. Gillian sees massive potential for cannabis in areas of health, energy, building and personal care products and is intrigued by the potential for cannabidiol (CBD) as an alternative to conventional treatments. You can contact Gillian here.
RELATED ARTICLES
News