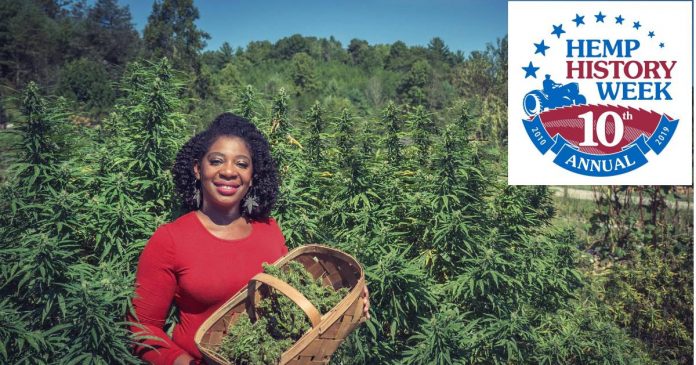 The USA’s Hemp History Week 2019 kicked off on Monday, and its organisers have an extra spring their step this year.

This year marks the 10th anniversary of the week-long event (June 3-9), the largest educational campaign about hemp in the U.S. This year’s theme is “return of the plant!”.

“The recent passage of the Farm Bill with the Hemp Farming Amendment has removed hemp from the Controlled Substances Act, and legalizes hemp farming in the U.S,” says the official web site. “This June, we will join together in victory across the country as we celebrate the Return of the Plant! and embark on a new era of hemp cultivation in American soil.”

Hundreds of related events are occurring throughout the week across the country and an event close to you can be found here. The events are designed to raise awareness about the environmental sustainability, benefits and new technological applications of hemp.

There’s even a music video to accompany Hemp History Week this year.

A bit of overkill? You be the judge. Full marks for enthusiasm though and the words “return of the plant” are now running around in my head in a loop without permission, so I guess it’s mission accomplished.

Hemp History Week is an initiative of the Hemp Industries Association (HIA) and is supported by industry participants including farmers along with advocates from all over the USA that have fought hard over many years to see prohibition lifted. As mentioned earlier this year, industrial hemp cultivation in the USA tripled in 2018 and by the end of the year, forty-one states defined industrial hemp as distinct from marijuana – with most of the holdout states to soon fall in line.

In other recent related news, in the leadup to this year’s festivities the HIA launched its “Hemp Is Legal” campaign, which targets what it says is Facebook’s hostile advertising policy prohibiting marketing and promotion of industrial hemp via Facebook and Instagram.

The Hemp Industries Association says it represents more than 1,500 supporters, farmers and business members, and has been serving the sector since 1994.

Industrial Hemp Now Legal In The U.S. State Of Alaska