HomeNewsHemp For Victory - 80 Years On

Hemp For Victory – 80 Years On 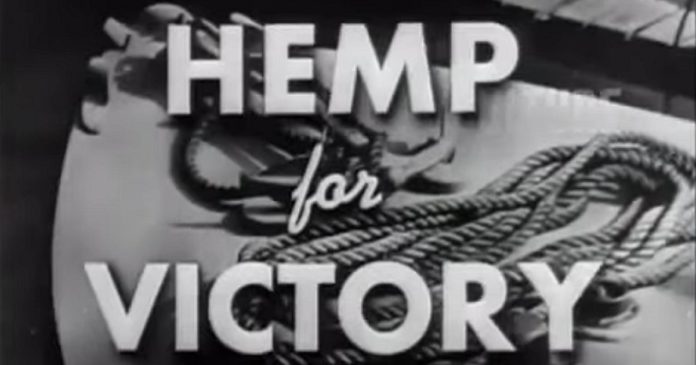 A wartime propaganda film urging US farmers to grow hemp is eighty years old this year.

Hemp for Victory was released by the US Government back in 1942 at a time when draconian laws on hemp cultivation were briefly eased so the crop could be grown for fiber for the war effort, which was in short supply. Hemp had previously been an important crop in the USA in the 18th, 19th and into the 20th centuries.

After the wartime need had passed, the US Government sought to distance itself from the film and tight restrictions were back in place, further ramped up in the Controlled Substances Act of 1970 that virtually banned the production of industrial hemp during the “war on drugs” – even though hemp has zero recreational value given its low THC content.

Hemp For Victory became largely forgotten until the late 1980’s and 1990’s when various activists and other interested parties obtained copies and began disseminating it more widely. Its redistribution was arguably very important in the fight to see hemp legal again as it served as a reminder hemp is incredibly useful and was previously government- endorsed when it suited the powers-that-be.

But it wasn’t until 2014 when hemp started to reappear more widely (legally) in some parts of the USA, thanks to the Farm Bill for that year making provision for hemp cultivation under pilot research programs.

Further helped along by the 2018 Farm Bill that fully legalised hemp at a federal level – defined as Cannabis sativa L. and any part of the plant with a delta-9 THC concentration of not more than 0.3 percent by dry weight –  today practically all states have hemp industries.

The 2014 and 2018 Farm Bills weren’t just important for the USA – they also provided signals to the rest of the western world.

Where once it was hidden, Hemp For Victory is now available from the National Archives – and of course, on Youtube.

Some interesting commentary on Hemp For Victory’s history can be found here.