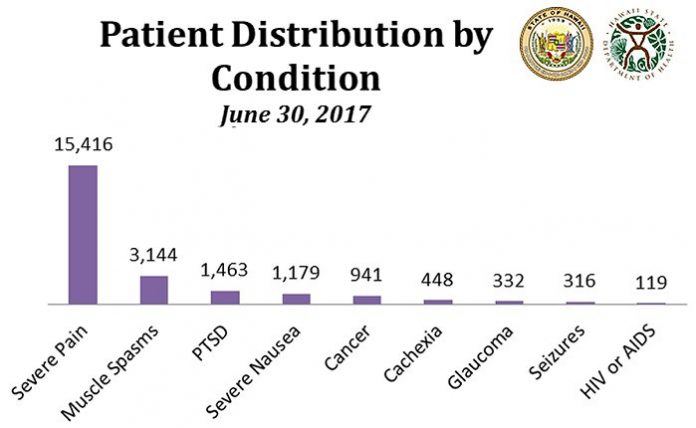 The latest statistics from Hawaii’s Department of Health show a continued steady increase in the number of patients registering for the state’s program.

In terms of age distribution, nearly a quarter of all patients registered are in the 55 to 65 age group and more than 40% of patients are aged 55 or older. Gender distribution brought some surprise, with a much larger proportion of males registered compared to females – 65% vs. 35%.

As indicated in the graph above, by far the most common condition cannabis is being used to treat is severe pain, accounting for 66%; followed by muscle spasms and Post Traumatic Stress Disorder (PTSD).

More June statistics for the Medical Marijuana Registry Program can be viewed here.

While medical marijuana has been legal in Hawaii since 2000, dispensaries were only able to begin growing the plant earlier this year after successful licensees were announced in May last year. The earliest the dispensaries could have opened was just a few days ago, on July 15 – but none are as yet.

Apparently, even though several of the licensees have medicine ready to sell, the delay now is due to the state Department of Health not having certified any of the three laboratories that will be carrying out testing of products.

In Hawaii, registered participants who have indicated an intent to grow their own supply of medical marijuana at a designated location are allowed to cultivate up to ten plants. No more than 4 ounces (128 grams) of usable marijuana can be possessed jointly between a registered patient and caregiver.

While medical cannabis is being increasingly embraced in the state, it appears use of the term “marijuana” has been making some uncomfortable. Earlier this year, we reported a bill that seeks to change the word in any related legislation to “cannabis”.

Last year, it was forecast Hawai’i’s cannabis dispensaries could collectively generate between USD $12 million and $38 million during their first 12 months of operations.