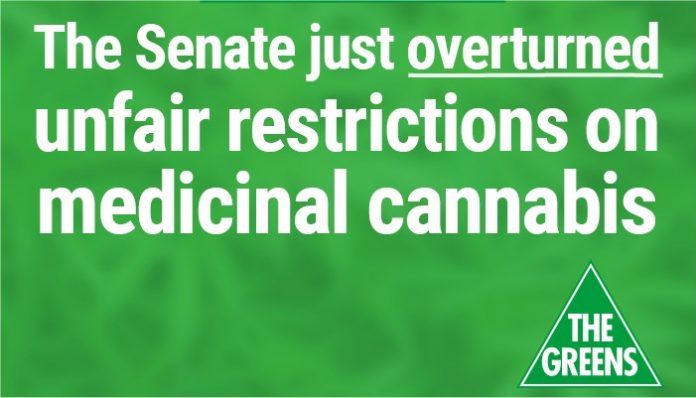 Thanks to the continued efforts of the Australian Greens, seriously and terminally ill patients will now find accessing medical cannabis products they have been prescribed a quicker process.

In May, it looked as though the Government was going to be successful in maintaining its removal of unregistered cannabis products from Category A of Australia’s Special Access Scheme after a Greens-sponsored amendment was defeated due to NXT and One Nation joining the Coalition in voting against it.

Maintaining of the status quo meant patients in urgent need of unregistered medical cannabis products could face weeks before approval (although this has been denied) instead of days; or even hours.

However, the Greens persisted and with the support of Labor, One Nation (this time) and other crossbenchers including Jacquie Lambie, the Senate has voted to reverse the changes and unregistered cannabis products will be re- included under Category A. The Bill was passed 40 votes to 30.

“The Senate has supported our motion to overturn unfair regulations, meaning patients will have faster access to the medical cannabis they are prescribed by their doctor,” said Greens Leader, Dr. Richard Di Natale.

“Yesterday, the Senate sent a message to Greg Hunt and the Liberals: you cannot deny treatment to those who need it, when they need it.”

As for Federal Health Minister Greg Hunt, he certainly wasn’t impressed by the outcome and will not let the matter rest as is.

“It is, unfortunately, a reckless and irresponsible decision,” he stated. “We cannot accept this and I have asked the Therapeutic Goods Administration for advice.”

“There’s nothing reckless about ensuring terminally ill patients with a prescription from their doctor can access medicinal cannabis.” The Senator said cannabis will only be imported from regulated markets overseas.

The Greens are not resting on their laurels and its “Make It Medicine” campaign continues.

“This is as important step – but it is just one of many we need to take to ensure that medicinal cannabis is available to all those who need it,” states the campaign page. “The Greens will continue to campaign for this issue until the Government puts in place a program that gives Australian patients a reliable, pain-free pathway to the treatments they need.”

Previous articleSessions Seeks End To Rohrabacher-Farr Amendment
Next articleDrone Guarding California Medical Cannabis Facility
Gillian Jalimnson
Gillian Jalimnson is one of Hemp Gazette's staff writers and has been with us since we kicked off in 2015. Gillian sees massive potential for cannabis in areas of health, energy, building and personal care products and is intrigued by the potential for cannabidiol (CBD) as an alternative to conventional treatments. You can contact Gillian here.
RELATED ARTICLES
News