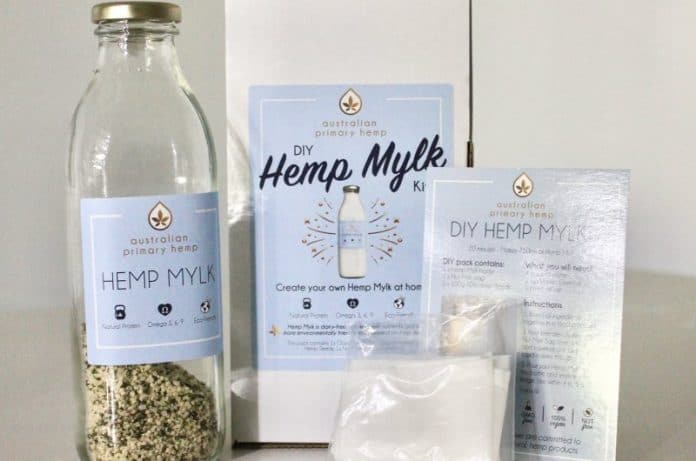 Australian Primary Hemp has released what it says is the nation’s first DIY hemp “Mylk” kit for those who want to tinker with producing hemp milk at home.

Interest in hemp milk has been rapidly building since a ban on it and other hemp seed food items in Australia was lifted last year. Hemp milk is produced from hulled (shells removed) hemp seeds that are soaked and ground in water.  Aside from its non-dairy attraction to some, hemp milk is highly nutritional. It contains:

Hemp milk can be hard to source in Australia as it seems it is flying off the shelves, so Australian Primary Hemp has produced a kit enabling people to make their own.

“Our DIY Hemp Mylk Kit allows consumers to make fresh hemp mylk in their own kitchen. Not only is hemp mylk a highly nutritious source of omega 3, 6 and 9, but it is also incredibly environmentally friendly,” said Australian Primary Hemp’s Skye Patterson. ” It is the company’s mission to keep providing Australia with the highest quality hemp products from product to plate and what better way to highlight this than with a new 100% Australian product!”

If you’re looking for a cheaper alternative, you could always just buy the hemp seeds from Australian Primary Hemp ($28.50 for 500 grams + shipping), source your own bottle and straining cloth and refer to the many Youtube videos for instructions on how to make hemp milk – it’s very simple to do. Some forgo the straining cloth as the sediment is quite fine.

As we mentioned last week, there’s been rumblings in the Australian dairy industry and elsewhere regarding use of the term “milk”. Some in the industry believe if a product doesn’t come from a cow, it shouldn’t be called milk; so the “mylk” distinguishes it from dairy products. There are also some consumers wanting to avoid dairy products for whatever reason and the word “milk” may make some think it contains a dairy product.

Since starting in August 2016, Australian Primary Hemp has evolved into one of the nation’s largest producer of locally grown hemp.  Based in Geelong, Victoria, its hemp is grown on a property in the west of the state, with grower partners in Tasmania, New South Wales, Victoria and South Australia.

Previous articleTilray Exports More Medical Cannabis To Australia
Next articleVirginia Names Five Medical Cannabis Pharmaceutical Processors
Gillian Jalimnson
Gillian Jalimnson is one of Hemp Gazette's staff writers and has been with us since we kicked off in 2015. Gillian sees massive potential for cannabis in areas of health, energy, building and personal care products and is intrigued by the potential for cannabidiol (CBD) as an alternative to conventional treatments. You can contact Gillian here.
RELATED ARTICLES
News