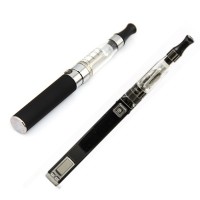 Researchers at the University of Lausanne vaping state cannabis based oils in electronic cigarettes can deliver beneficial cannabinoids such as cannabidiol (CBD) and tetrahydrocannibinol (THC) effectively, while providing a reduction of  toxic contaminants released during the combustion of regular cannabis cigarettes.

The nature of combusting plant materials is such that whatever benefit is provided by some compounds is also accompanied by some nasty materials. Some of these toxins are the same as those created when burning tobacco, such as formaldehyde, a cetaldehyde and polycyclic and aromatic hydrocarbons (PAH); known to be carcinogenic.

What the researchers called “cannavaping,” involved spiking liquid refills for commercially available e-cigarettes with cannabinoid-rich preparations, including BHO (butane hash oil). While BHO didn’t dissolve readily in commercial liquid refills, this may discourage recreational use while still proving to be an efficient route for medicinal administration.

“In our opinion and according to other scientists, recreational “cannavaping” remains possible with e-cigarettes; however, its poor efficiency makes the risk of observing a new recreational cannavaping trend unlikely,” state the researchers.

“..therapeutic applications of cannavaping have undeniable benefits over other administration routes, with the controlled dosage of cannabinoids-enriched liquid refills,” state the researchers.

The scientists point out it’s important that voltage of the vaping equipment is kept low enough not to trigger any combustion. While basic ecigarette battery devices usually operate under a fixed voltage; more advanced devices offer a wide user-selectable voltage range . However, when voltage settings are set too high it also creates an unpleasant taste; discouraging the practice.

The research has been published in the journal Scientific Reports.

A previous study by researchers from University of Bern in Switzerland also indicated vaporization of cannabis using purpose-made vaporisers may be a viable method of avoiding potentially toxic pyrolysis products while still retaining the benefits associated with smoking medical marijuana. Special cannabis vaporizers that use plant material or “wax” have been commercially available for some years.

Smoking or vaping is seen as superior to ingestion with regard to therapeutic aspects as ingestion is often characterized by erratic absorption and poor bioavailability.