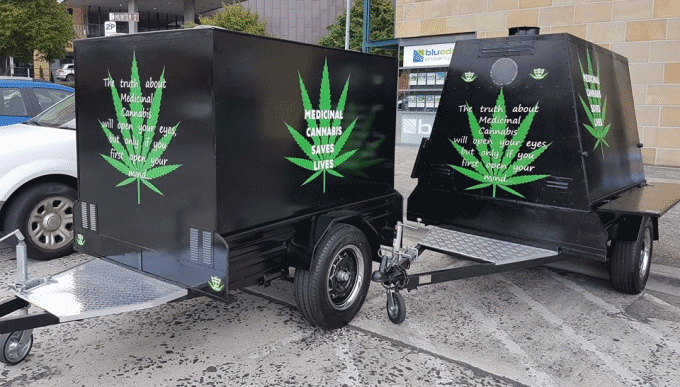 A pair of trailers will soon be making the rounds of the Australian state of Tasmania, providing educational resources on medicinal marijuana.

A project of Medicinal Cannabis & Hemp Tasmania, the initiative has been made possible through various fundraising activities.

The original goal was to build one educational trailer, but through some good fortune and support, two “Little Green Trailers” will be traversing the Apple Isle.

The man behind the group and initiative is Andrew Irving. Mr. Irving’s wife, Marilyn, is suffering a degenerative nerve condition. Marilyn’s Corticobasal Syndrome symptoms have been alleviated with the use of cannabis medicines.

Mr. Irving has been a tireless campaigner for medicinal marijuana in Tasmania.

Gaining support for the launch of the trailers from politicians proved challenging though, but Labor stepped up to the plate.

“Thank you Labor Senator Carol Brown for doing the honours this morning of launching the educational trailers,” states a post on the group’s Facebook Page.

” Yourself and Labor have stood along side of us for a long time. Invitations were sent to virtually all of the politicians, once again only Labor showed any support in this state for medicinal cannabis.”

“This is another step in helping Tasmanians understand how medicinal cannabis has helped ease the suffering of so many people,” she said.

The issue has been a hard slog in Tasmania at a political level, but appears to have found an ally in the state’s Police Minister, Rene Hidding. Minister Hidding has committed to looking into establishing a register for people accessing medicinal cannabis to protect them from prosecution while Australia goes through the lengthy process of providing far greater legal access.

Important federal legislation relating to medical cannabis was passed in February and regulations were published last month, but the road will be bumpy and hasn’t been assisted by pressure from some corners – including the Royal Australian College of General Practitioners (RACGP).

The RACGP are less than enthusiastic about its members prescribing cannabis medicines; calling them “a medication of last resort“.

Even when a national program is fully in place, Mr. Irving fears the approval process in Tasmania will be lengthy and licence fees prohibitive.

“That could take six months [for approval], the person is still suffering and in pain if they’re not operating illegally and treating themselves,” he said.

Previous articleCanadian Veterans To Be Reimbursed For Medical Marijuana
Next articleLifting Australia’s Hemp Food Ban – An Excruciatingly Slow Process Continues
Gillian Jalimnson
Gillian Jalimnson is one of Hemp Gazette's staff writers and has been with us since we kicked off in 2015. Gillian sees massive potential for cannabis in areas of health, energy, building and personal care products and is intrigued by the potential for cannabidiol (CBD) as an alternative to conventional treatments. You can contact Gillian here.
RELATED ARTICLES
News