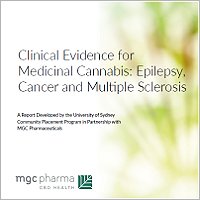 In collaboration with the University of Sydney, Australia’s MGC Pharmaceuticals has published a new white paper on medical cannabis.

The paper, Medical Cannabis: Epilepsy, Cancer and Multiple Sclerosis, examines currently existing evidence supporting the use of medical cannabis in treating those diseases.

The researchers found strong clinical evidence supporting its use as a treatment for multiple sclerosis and “cautious optimism” on the treatment of  intractable childhood epilepsy. With regard to cancer, its effectiveness in treating the symptoms of pain, nausea, vomiting and depressed appetite has been recognised by the Clinical Oncology Society of Australia, but more research is needed.

There have been a number of anecdotal reports of the benefits of cannabis in treating cancer itself, but the paper states there is currently insufficient clinical evidence to support this; and also with regard to the prevention of cancer.

The  evidence presented in the publication has been primarily limited to high quality, placebo controlled clinical trials with published results. The authors acknowledge clinical evidence on medicinal cannabis is patchy due to a lack of research, but this does not indicate a lack of medical potential.

“Australia has made great advances in paving the way for medical cannabis to be available as a treatment option, but we now need to undertake more research to understand exactly how and why it can be used effectively with patients,” said Michael Katz from University of Sydney Business School; who also coordinated the study.

The next edition of this paper, if one is published, should have significantly more sources of data to draw on. More than 100 clinical trials are currently being conducted on medicinal cannabis around the world, a trend the authors note looks set to continue. However, they warn research continues to be constrained, prohibited or actively discouraged due to unnecessarily complex regulatory, legal and social barriers.

The latest paper follows an earlier one from MGC Pharma and the University that detailed the current and future market for medicinal marijuana in Australia. It estimated that to satisfy current demand, at least 8 tonnes needs  to be produced annually.

The latest publication can be downloaded here (PDF).

Previous articleMedical Cannabis Available To New Jersey PTSD Patients
Next articleTaming Energy Costs In Marijuana Cultivation
Gillian Jalimnson
Gillian Jalimnson is one of Hemp Gazette's staff writers and has been with us since we kicked off in 2015. Gillian sees massive potential for cannabis in areas of health, energy, building and personal care products and is intrigued by the potential for cannabidiol (CBD) as an alternative to conventional treatments. You can contact Gillian here.
RELATED ARTICLES
News