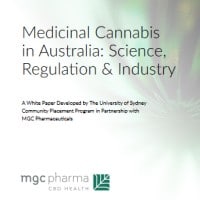 A joint publication by MGC Pharmaceuticals and the University of Sydney Business School, the document estimates the Australian market is currently potentially worth A$100-150 million a year, and is likely to grow significantly in over the next ten years.

To satisfy projected current local demand for products and based on consumption in other countries, at least 8,000kg of medicinal cannabis needs to be produced per annum. If grown in greenhouses, this would require 13,000 to 51,000 m2 of greenhouses and a larger area if grown outside. This isn’t a concern as Australia has so much suitable space for cultivation; both indoors and outdoors.

The 8,000 kg estimate is in relation to whole plant type therapies, but the real prize at the moment is the specific cannabinoids they hold; which make up a small proportion of a plant’s weight.

Combining the aggregate amounts for potential demand associated with the treatment of just HIV/AIDS, MS and Epilepsy, 166.6 kg of the cannabinoids THC (tetrahydrocannabinol) and 404.7 kg of CBD (cannabidiol) would be required in Australia each year.

The paper states one of the greatest hurdles facing medicinal cannabis in Australia has been getting cannabis-based medicines approved by the Therapeutic Goods Administration (TGA).

“The medicinal cannabis industry in Australia will face some unique challenges. The commercial viability of the industry and its ability to provide high quality and affordable medicine to those in need will be strongly determined by Government regulation,” it says.

“Regulation will affect the cost, quality and safety of cannabis medicines as well as the capacity for the industry to be innovative, responsive and scalable.”

In February, legislation was passed to enable the “safe, legal and reliable” supply of medicinal cannabis products – but there is a significant amount of devil in the detail and much yet to be hammered out.

The challenges aside, it’s a very exciting time for the nascent industry; with not only massive potential for profit, but also for doing a great deal of good.

The white paper serves as a framework for Australia’s medical cannabis industry to start engaging key stakeholders including the Australian Government and the medical community say its authors.

“What’s exciting about this White Paper is that it brings together the university, the market and government – which is directly in line with the Turnbull Government’s vision for universities to be more engaged in the innovation strategy for the country,” said University of Sydney Business School’s Michael Katz.

Previous articleCannabinoid Spray Observed Easing MS Muscle Spasticity
Next articleStrong Support For Medical Cannabis In New Zealand
Gillian Jalimnson
Gillian Jalimnson is one of Hemp Gazette's staff writers and has been with us since we kicked off in 2015. Gillian sees massive potential for cannabis in areas of health, energy, building and personal care products and is intrigued by the potential for cannabidiol (CBD) as an alternative to conventional treatments. You can contact Gillian here.
RELATED ARTICLES
News