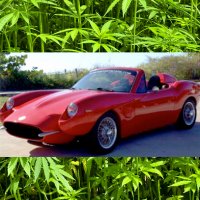 Renew has revived the 1950’s and 60’s era of rolling art cars with a range of industrial hemp bodied vehicles with petrol or electric engine options up to 525HP. The company’s long term goal is to create cars  that are 100% carbon neutral and non-polluting.

Industrial hemp was chosen as a material for the bodywork as is it lighter than than steel or fiberglass, resists dents and isn’t as brittle as carbon fiber. In addition to being biodegradable, hemp is also carbon-negative.

Weighing just 2,400 lbs, the Canna 265 Turbo has a power to weight ratio comparable to a Porsche 911 Cabriolet but costs around half the price.

Renew vehicles can also  run on ethanol, including hemp ethanol if it is ever made available.

Also available are upgrade kits to convert the Canna to an EV, claimed to be 22% greener than the average electric vehicle.

Renew kits can be purchased to suit ’90-’97 Miata vehicles.

The Renew “cannabis car” has been touring parts of the USA, starting in Key West and finishing up in Boulder, Colorado. The vehicle was fueled with BioButanol, an alcohol that can be produced from organic material such as corn, wheat and sugar cane. It’s expected that in the future non-food plants such as industrial hemp can be used to produce BioButanol.

Trivia – In the 1940’s Henry Ford toyed with the idea of creating a vehicle shell based on plant materials, including hemp. Ford chemists reportedly developed a material composed of 70 per cent cellulose fiber and 30 percent binder. The cellulose fiber consisted of 50 per cent pine fiber, 30 per cent straw, 10 per cent hemp and 10 per cent ramie (a flowering plant in the nettle family native to eastern Asia). Renew Sports Cars was inspired by Mr. Ford’s work.